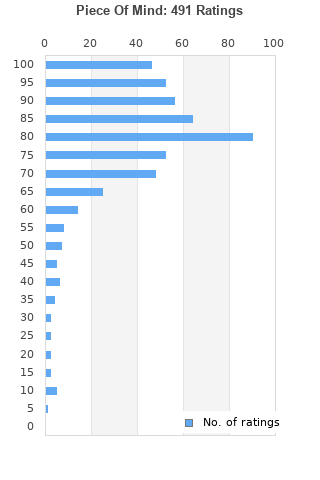 Iron Maiden: Piece of Mind ceramic drink coaster mint condition will combine s/h
Condition: Like New
Time left: 5h 22m 17s
Ships to: Worldwide
$3.99
Go to store
Product prices and availability are accurate as of the date indicated and are subject to change. Any price and availability information displayed on the linked website at the time of purchase will apply to the purchase of this product.  See full search results on eBay

Piece Of Mind is ranked 5th best out of 35 albums by Iron Maiden on BestEverAlbums.com.

The best album by Iron Maiden is The Number Of The Beast which is ranked number 278 in the list of all-time albums with a total rank score of 7,004. 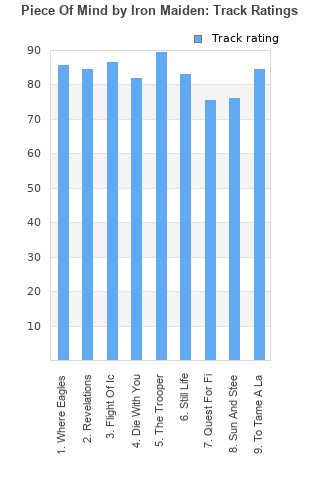 Rating metrics: Outliers can be removed when calculating a mean average to dampen the effects of ratings outside the normal distribution. This figure is provided as the trimmed mean. A high standard deviation can be legitimate, but can sometimes indicate 'gaming' is occurring. Consider a simplified example* of an item receiving ratings of 100, 50, & 0. The mean average rating would be 50. However, ratings of 55, 50 & 45 could also result in the same average. The second average might be more trusted because there is more consensus around a particular rating (a lower deviation).
(*In practice, some albums can have several thousand ratings)
This album is rated in the top 2% of all albums on BestEverAlbums.com. This album has a Bayesian average rating of 80.0/100, a mean average of 78.4/100, and a trimmed mean (excluding outliers) of 80.2/100. The standard deviation for this album is 17.6.

Tied with Powerslave in my ears.

I view this as rather underrated. Only 2 or 3 tracks are below par, the rest range from very good to great. Overall, 75/100.

First Maiden I bought. Hooked forever more so I got a soft spot for this album so I've probably rated it a bit higher than it deserves. Doesn't have the overall quality in songs that are on a few of the others but overall still a damn fine record. Highlights being 'Where Eagles Dare', Flight of Icarus' & 'To Tame a Land'

Not really as heavy as the last few albums, and a few of the songs kinda blended together for me, and sun and steel especially sounded pretty generic and cheesy. But Flight of Icarus, revelation and Trooper are so good that they make up for the average stuff. Still a great maiden album worth listening to, even if the first half is much stronger.

One of the weaker Maiden albums of the 80's in my opinion, although it's got a very unique feel/production to it (at least guitar-wise). The power chords don't feel necessarily heavy or even loud, but very bass-y and deep. I love that aspect of it. It opens with its best track ("Where Eagles Dare"), with some phenomenal drumming by newcomer Nicko Mcbrain (a great personality for the band). Some other very notable cuts for me would be the catchy and unique "Die With Your Boots on", "Still Life", "Revelations", and the very popular "The Trooper". Aside from that, you have "To Tame a Land", which is the very interesting closing track in that it's not a particularly easy to love track, but I certainly see myself loving it after many listens. "Flight of Icarus" is a good track, but I'm not too fond of the chorus. Lastly, I'm not a huge fan of "Sun and Steel" and "Quest for Fire". Perhaps they'll grow on me, but, despite this album's songwriting imperfections, it's one of their best feeling albums in my opinion, and most of the tracks are definitely worth buying the entire album for.

To be honest: It's hard to come up with a new Album after a masterpiece like "Number Of The Beast". The follow up must be dissapointing! And it was... But nevertehless it's a f***ing great Album. The Singles "Flight Of Icarus" and "The Trooper" rule! "Still Life" and "Dune - To Tame A Land" are outstanding tracks although they never were really discovered by the common Maiden-Fan. Do you need one more argumet? "Revelations"! What an amazing - a bit doomy - song! It took me almost 20 years to get into it. I never liked it, when it was played life, but at the end... I was hooked. Too late to enjoy it's live performance :-(

Well well. Who'd have thought maiden had made albums this good. Damn, surprised myself with this one. I don't even see the tapering off that a few have mentioned. Wonderful proggy rhythms, that great Lizzy style dual lead and the harmony vocal. Never a dull moment. Got to be a equal of the Metallica debut, same year.

Your feedback for Piece Of Mind