Synchronicity (album) by The Police 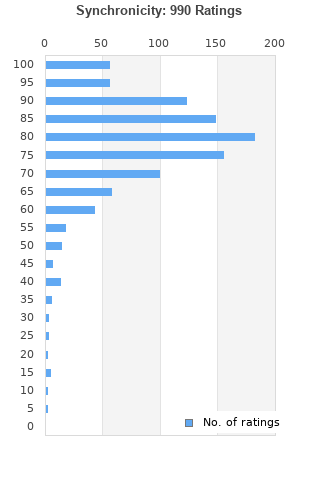 The Police Synchronicity,original 1983 Vinyl Album,Old Shop Stock UNPLAYED ....
Condition: Used
Time left: 3h 25m 52s
Ships to: Worldwide
£10.50
Go to store
Product prices and availability are accurate as of the date indicated and are subject to change. Any price and availability information displayed on the linked website at the time of purchase will apply to the purchase of this product.  See full search results on eBay

Synchronicity is ranked as the best album by The Police. 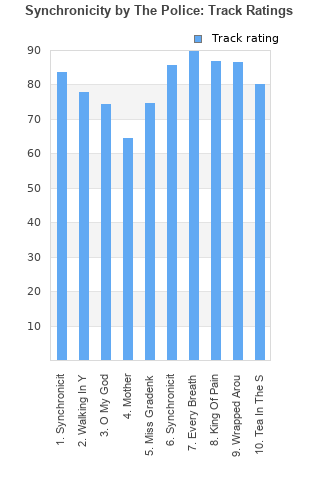 Wrapped Around Your Finger
Rating: 87 (213 votes)Comments:

Rating metrics: Outliers can be removed when calculating a mean average to dampen the effects of ratings outside the normal distribution. This figure is provided as the trimmed mean. A high standard deviation can be legitimate, but can sometimes indicate 'gaming' is occurring. Consider a simplified example* of an item receiving ratings of 100, 50, & 0. The mean average rating would be 50. However, ratings of 55, 50 & 45 could also result in the same average. The second average might be more trusted because there is more consensus around a particular rating (a lower deviation).
(*In practice, some albums can have several thousand ratings)
This album is rated in the top 3% of all albums on BestEverAlbums.com. This album has a mean average rating of 78.0/100. The trimmed mean (excluding outliers) is 78.6/100. The standard deviation for this album is 14.5.

Best album by the Police. Best album of 1983. Great audio quality. Great singing and drumming. I like the whole album except "Mother". Favorite song: "Wrapped Around Your Finger" Bonus track on CD:"Murder By Numbers is also very good.

Best album from 1983. Even better than Murmur. Them success at the moment was compared with The Beatles. Also them most experimental and concpetual work.

Good, for the most part. I just have a hard time understanding the seeming concensus that this is better than Regatta da blanc. It has great highs, but pretty inconsistent in terms of both tone and quality.

The great songs make this a 5 star classic album.

First the good: there are a lot of outstanding, timeless songs on this album. Now the bad: in typical Police fashion, there are a couple of tracks on here that are so awful I have to wonder what they were thinking.

The title II in the middle of the album is the band's best work. It goes rapidly downhill both before and after.

Synchronicity has fantastic moments but is limited but jazzier and popier tracks of the b-side.

Favourite album of the Police. Solid songs all around, but the singles are the strongest part of the song. "Every Breath You Take" is a bona fide classic at this point.

Some good songs but just doesn’t grab me the way earlier albums do.

Your feedback for Synchronicity