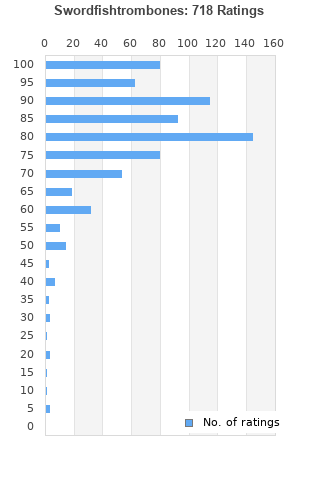 Swordfishtrombones is ranked 2nd best out of 28 albums by Tom Waits on BestEverAlbums.com.

The best album by Tom Waits is Rain Dogs which is ranked number 102 in the list of all-time albums with a total rank score of 15,968. 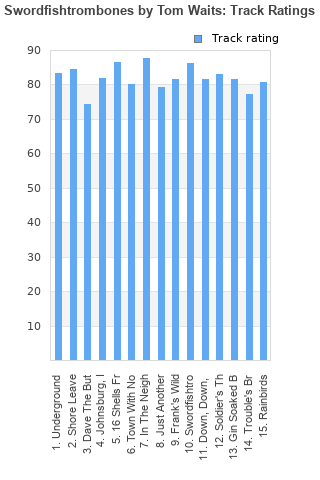 In The Neighborhood
Rating: 88 (146 votes)Comments:

Rating metrics: Outliers can be removed when calculating a mean average to dampen the effects of ratings outside the normal distribution. This figure is provided as the trimmed mean. A high standard deviation can be legitimate, but can sometimes indicate 'gaming' is occurring. Consider a simplified example* of an item receiving ratings of 100, 50, & 0. The mean average rating would be 50. However, ratings of 55, 50 & 45 could also result in the same average. The second average might be more trusted because there is more consensus around a particular rating (a lower deviation).
(*In practice, some albums can have several thousand ratings)
This album is rated in the top 1% of all albums on BestEverAlbums.com. This album has a Bayesian average rating of 81.7/100, a mean average of 80.8/100, and a trimmed mean (excluding outliers) of 81.9/100. The standard deviation for this album is 15.1.

Swordfishtrombones is one of those albums that makes me think "I wish I'd made that". Fantastic album.

I thought this album was gonna be a bit more experimental than it ended up being after hearing the first track, which, if I'm gonna be honest, disappointed me to some degree. But I was not disappointed by the excellent songwriting. Tom Waits deserves more credit for his ability to craft an interesting collection of songs that are just experimental enough to make you think about how it was written and how it makes you feel. Swordfishtrombones is excellent.

Weird starter but the double bass sound on this record is truly amazing!
Overall quality of sound is great. Also, the music is well crafted but not particularly brilliant.
It has a lot of interesting improvs that end with fadeout. Guess it wasn't designed as a total piece but as a good collection of tracks, jams, timbres, sounds, textures, etc :)

Now here's an interesting one- one magazine named this the second greatest album of all time, while others find it forgettable even within Waits' own catalog.

Waits brings out his literary side, taking interest, like in Rain Dogs, in musical's "thief" characters, but with this album you have more of a countryside influence than the urbane Rain Dogs- many songs, like "Town with No Cheer", "In the Neighborhood", and "Swordfishtrombone" sound to me like you're in a strange, storybook French village. I also hear some influence from the trompe l'oeil art movement (or perhaps 17th century Dutch painting), especially in "Soldier's Things", a song that along with "Shore Leave" captures postwar loneliness. The same may be Waits's best spoken word track, with every line infinitely evocative.

With all these incredibly unique influences you'd think that'd make an absolute classic. Well, I'm not sure the album is well ordered- it never gets into a groove of songs that you can take together rather than on their own merits. I also really do not understand what people see in "16 Shells from a 30.6"- I think this is definitely one of Waits's weaker tunes (great instrumentation but repetitive track), and it takes up a lot of space on a short album. The urbane songs ("Down Down Down", "Gin Soaked Boy") do in a way sound like Rain Dogs equivalents but not as good. "Frank's Wild Years" is a bit overdone, and the instrumental "Rainbirds" really should have found itself on one of Waits's 70s albums as a closer instead.

Being new to Tom Waits' stuff I can say he's starting to grow on me. Though I heard Rain Dogs a few times before this (even though I like it), this one just clicked with me almost immediately on first listen. I can't explain why but all I know is that I'm in for an interesting ride into his work

Listening to this is like entering one of those weird antique shops that smells of incense and it's full of religious imagery and wooden statues and there's some creepy old hippy woman at the counter.

Out of all my record collection, I think this album took the longest for me to realise how great it actually was, I had it roughly 13 years before I truly loved it.

Swordfishtrombones was the beginning of Tom Waits more experimental period which then went on to include Rain Dogs and Frank’s Wild Years to complete his 1980’s trilogy of classic albums.

After a number of plays it becomes hard to imagine this was ever considered a difficult listen really, and even then there are a number of what could be considered ‘normal’ tracks like Soldier’s Things, Johnsburg Illinois and the delightful In The Neighbourhood to name but three.

Your feedback for Swordfishtrombones