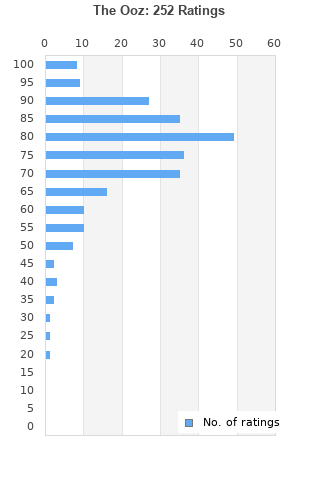 The Ooz by King Krule (CD, 2017) [Digipak]
Condition: Like New
Time left: 1d 19h 41m 16s
Ships to: Worldwide
$14.99
Go to store
Product prices and availability are accurate as of the date indicated and are subject to change. Any price and availability information displayed on the linked website at the time of purchase will apply to the purchase of this product.  See full search results on eBay

The Ooz is ranked as the best album by King Krule. 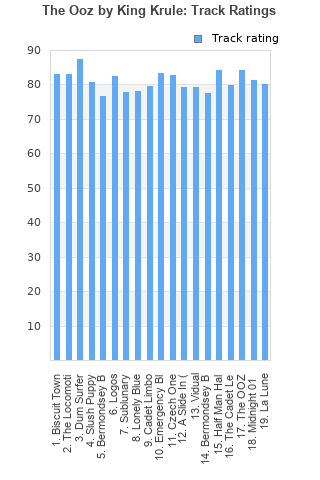 Rating metrics: Outliers can be removed when calculating a mean average to dampen the effects of ratings outside the normal distribution. This figure is provided as the trimmed mean. A high standard deviation can be legitimate, but can sometimes indicate 'gaming' is occurring. Consider a simplified example* of an item receiving ratings of 100, 50, & 0. The mean average rating would be 50. However, ratings of 55, 50 & 45 could also result in the same average. The second average might be more trusted because there is more consensus around a particular rating (a lower deviation).
(*In practice, some albums can have several thousand ratings)
This album is rated in the top 5% of all albums on BestEverAlbums.com. This album has a Bayesian average rating of 77.1/100, a mean average of 76.4/100, and a trimmed mean (excluding outliers) of 77.3/100. The standard deviation for this album is 13.6.

Already full of promise after his debut album 6 Feet Beneath The Moon and stand-out appearances on Mount Kimbie’s Cold Spring Fault Less Youth, King Krule changes gear again with a blurry, sombre album that perfectly captures the feeling of being in your early twenties, rejecting any kind of commitment while still hoping aimlessly to find a consistent identity.

This album takes you on a one way solo trip to the moon. At first you are excited and a maybe a little scared (Biscuit Town, The Locomotive, Dum Surfer), but then you realize there is nothing there and you are all alone, sinking into a depressive atmosphere (most tracks) and ocassionally having small mental breakdowns (Vidual, Half Man Half Shark).

Just appreciate this album for what it is to you.

My AOTY for 2017, an admittedly weak year for new music. This may not be the most exciting album on track by track basis, but it is thoroughly unique and incredibly atmospheric, and one of the few rock albums in recent years that's really pushed the genre forward in such interesting ways and promising ways.

I think for me personally this was one of the year's bigger surprises. I feel like Archy Marshall really etched out his own space here that none of his peers are close to tapping into. It's a tapestry that showcases the in-between of genres, emotions, characters and backdrops of where the narratives transpire. And it's quite a sizeable progression when compared to 2013's 6 Feet Beneath The Moon.

A drunken and ashy piece of work.
There's a lot to process in Archy's densest work so far but there is a magical desperation in the Londoner songs which truly creates an unique ambiance.

This is gonna take a while to process, but it's definitely an AOTY contender. It has something for everyone, marked by Krule's one of a kind voice.
Fav tracks: Czech one, Half man half shark, Vidual

His most dense work. I'll keep having to come back to this one over the months to see how the music changes for me. The record has great atmosphere and character.

Your feedback for The Ooz