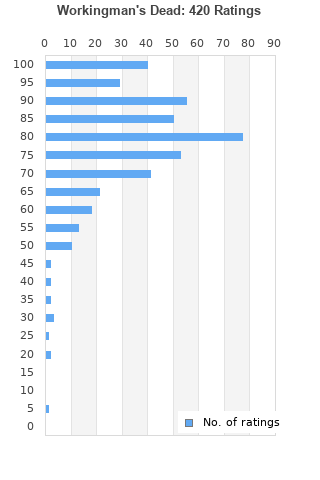 THE GRATEFUL DEAD. WORKINGMAN'S DEAD. WARNER BROS. WS 1869. 1970.
Condition: Used
Time left: 13h 34m 14s
Ships to: Worldwide
$59.99
Go to store
Product prices and availability are accurate as of the date indicated and are subject to change. Any price and availability information displayed on the linked website at the time of purchase will apply to the purchase of this product.  See full search results on eBay

Workingman's Dead is ranked 2nd best out of 156 albums by Grateful Dead on BestEverAlbums.com.

The best album by Grateful Dead is American Beauty which is ranked number 308 in the list of all-time albums with a total rank score of 6,303. 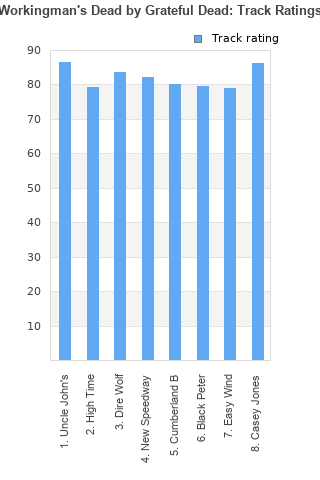 Rating metrics: Outliers can be removed when calculating a mean average to dampen the effects of ratings outside the normal distribution. This figure is provided as the trimmed mean. A high standard deviation can be legitimate, but can sometimes indicate 'gaming' is occurring. Consider a simplified example* of an item receiving ratings of 100, 50, & 0. The mean average rating would be 50. However, ratings of 55, 50 & 45 could also result in the same average. The second average might be more trusted because there is more consensus around a particular rating (a lower deviation).
(*In practice, some albums can have several thousand ratings)
This album is rated in the top 2% of all albums on BestEverAlbums.com. This album has a Bayesian average rating of 79.9/100, a mean average of 79.1/100, and a trimmed mean (excluding outliers) of 80.1/100. The standard deviation for this album is 15.1.

A step behind American Beauty as an album, but featuring more songs on my all-time favorite playlist.

A tiny bit weaker than "American Beauty", but it contains my favorite song by them "Casey Jones". Overall, 65/100.

Not as consistently strong as a American Beauty but it’s peaks are just as high.

The weak track for me is Cumberland Blues, a great tune, but the arrangement here is weird, starting out electric--a very thin-toned electric--then bringing in the banjo and going full acoustic. It sounds like an outtake to me, and Europe '72 obviously has the definitive version of that tune. Otherwise, this is a classic. Easy Wind is one of Pigpen's finest moments, so good.

In my opinion the slightly weaker of the two 'country' records the Grateful dead released in 1970. Workingman's dead, is still a fine record, but it just doesn't have a, ripple, on it. Still fine songs in, high time, new speedway boogie, and, Casey Jones. Good summertime sounds.

Casey Jones is one of my favorites of theirs. I'm totally a song fan of them... the albums are ok.

It was scrosanct in my post punk upbringing, until the 60s revival of the 80s reached the imagined westcoast. This music turned my world upside down. I called my friends after having listened to it the first time, telling them, I just heard the best music I ever listened to. Maybe the "no" in the music, the tension and drama opened it for me. But no "Girl" was making you sigh, no Candy Darling was speaking about suicide, no change in a Caroline made the singer cry "No!" and there was not even an Alice to ask, only a crow, who had one story to tell, not a nice story yet. The music sounded like an experiment, the compositions were often unusual, if not adventurous, so that, what is often regarded as a step backwards seemed to me like experimental music. Not in the sense of improvised explorations, but as very strange constructions made of wood, very beautiful, stunning. Even the lightest note surrounds the idea of freedom with a sceptical glance, whispering: "be happy if it doesn't feel too easy", then you meet people dying in pain, working in the mine or for the great highway while drinking themselves to death. A speedo will cause a train crash and in the desert heat a man freezes, next to him, a bundle of golden trasures, robbed relics of the past, that his poor horse didn't want to carry anymore. Even stranger: the one question echoing from all that asks: "Are you kind?", in the voice of the crow as it feels to me. I haven't listened to that album for many years, but many songs appear frequently in the taped shows, though I hope one day I will be able to listen to it with the astonishment of those first moments.

It marked a bit of a change of direction for the iconic Bay Area jam band. This eight cut album was more of a studio product with arrangements closely akin to pop, rock and country songs.

Your feedback for Workingman's Dead