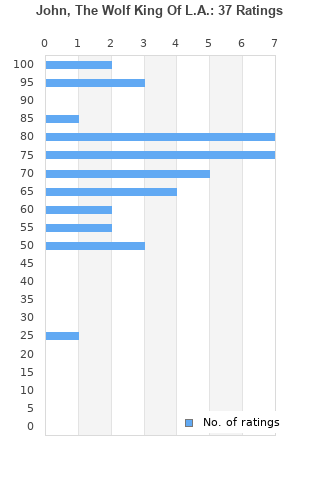 Sounds of York Minster / Philip Moore, York Minster Choir by John Scott Whiteley
Condition: Good
Time left: 1h 3m 13s
Ships to: Worldwide
$8.10
Go to store
Product prices and availability are accurate as of the date indicated and are subject to change. Any price and availability information displayed on the linked website at the time of purchase will apply to the purchase of this product.  See full search results on eBay

John, The Wolf King Of L.A. is ranked as the best album by John Phillips.

Listen to John, The Wolf King Of L.A. on YouTube 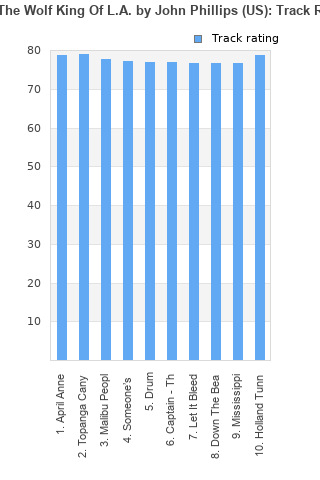 Rating metrics: Outliers can be removed when calculating a mean average to dampen the effects of ratings outside the normal distribution. This figure is provided as the trimmed mean. A high standard deviation can be legitimate, but can sometimes indicate 'gaming' is occurring. Consider a simplified example* of an item receiving ratings of 100, 50, & 0. The mean average rating would be 50. However, ratings of 55, 50 & 45 could also result in the same average. The second average might be more trusted because there is more consensus around a particular rating (a lower deviation).
(*In practice, some albums can have several thousand ratings)
This album is rated in the top 24% of all albums on BestEverAlbums.com. This album has a Bayesian average rating of 74.6/100, a mean average of 73.5/100, and a trimmed mean (excluding outliers) of 75.0/100. The standard deviation for this album is 16.0.

Sometimes an album comes out of nowhere and just steals your heart. You didn’t see it coming. You didn’t expect it. The crush starts off unassumingly enough. But then it grows. It creeps under you skin and forges with your muscles, with your tissues. Its just one of those albums that gets better with every single spin. The songs just seem so natural, like they’ve always been a part of you and you can’t imagine that album not always having been in your life. It has the feel and soul of a late 60s The Band or Dylan album while being Laurel Canyon at its core all the way. I’m convinced this is Father John Misty’s favorite album. I’m positive that in his teens he played it every single day, and just dreamed of being this Wolf King of LA. Ask him yourself, if you don’t believe me. I don’t need to.

It totally captures the spirit and fire of an old time saloon straight out of Deadwood. With a piano in the corner and beer & whiskey merrily going around. Everyone’s in great spirits and laughter and hearty conversation fill the air. You sit in your seat as the beers kick in feeling free & easy after a hard days work in the sun singing and dancing to yourself. Not a care in the world. Occasionally, the local drunk actually does get up to dance by the piano and everyone gives a knowing laugh, egging him on & inwardly hoping he will fall. You get the feeling that Rocky Raccoon is going to step through those saloon doors at any moment. And maybe, he just might.

Grade: A. This is a total lost classic, and easily one of the Laurel Canyon’s best albums from its heyday. It’s free & easy and completely natural and effortless. A good time, drinking album with a backing band (and backup singers) to die for. The slide guitar steals the show on quite a few numbers but the playing from all is impeccable. This must have been quite the project to put together, and it’s a bit of a shame it’s not more well known. It’s combination of country, folk and rock is really second to none. And it drunkenly staggers all the way to number three.

A great over looked album by a force in the 60's. Great production and musicians.

Does this classify as a "Great Lost Album"? Seems to be very overlooked, both here on BEA and in music history. It's compulsive listening, has really great songs, sounds like a great Cali band at the end of it's tether, in fact it sounds like the '60's Californian hippy dream at the end of it's tether - I seem to think it was recorded as the 'Manson Family' stalked the Hollywood Hills around which it was being recorded. OK, so this guy never really recorded a note of decent music again, but this was a grand swan song. If you listen to this I don't think you'll easily forget it.

This has been a pleasant surprise. Strong album overall with great song-writing and melodies and a back-up band to die for.

So much better without the 'Mama's'

Your feedback for John, The Wolf King Of L.A.