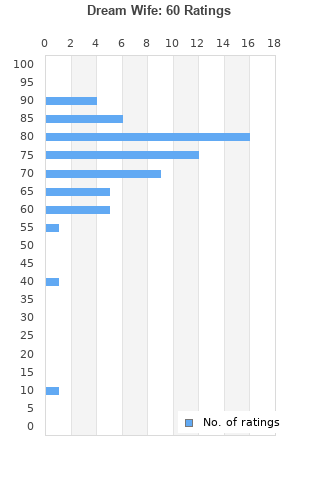 Military Wives - In My Dreams (2012)
Condition: Acceptable
Time left: 22h 22m
Ships to: Worldwide
£1.00
Go to store
Product prices and availability are accurate as of the date indicated and are subject to change. Any price and availability information displayed on the linked website at the time of purchase will apply to the purchase of this product.  See full search results on eBay

Dream Wife is ranked as the best album by Dream Wife. 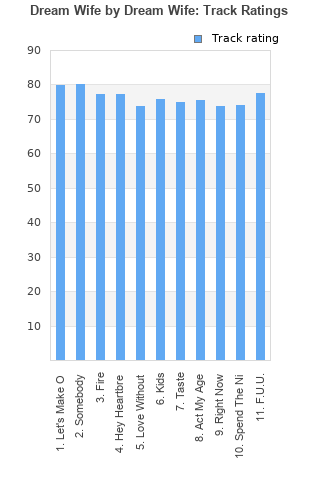 Rating metrics: Outliers can be removed when calculating a mean average to dampen the effects of ratings outside the normal distribution. This figure is provided as the trimmed mean. A high standard deviation can be legitimate, but can sometimes indicate 'gaming' is occurring. Consider a simplified example* of an item receiving ratings of 100, 50, & 0. The mean average rating would be 50. However, ratings of 55, 50 & 45 could also result in the same average. The second average might be more trusted because there is more consensus around a particular rating (a lower deviation).
(*In practice, some albums can have several thousand ratings)
This album has a Bayesian average rating of 74.1/100, a mean average of 73.1/100, and a trimmed mean (excluding outliers) of 74.3/100. The standard deviation for this album is 12.4.

Attractive, expansive mix of the more modern edges of post-punk and leftfield, arty pop, nothing particularly groundbreaking but very well done with an inspired set of performances from everybody involved.

Dream Wife's playful, unending energy is impossible not to be drawn into and kick's ass with its punky spirit and lush production. Their debut album offers plenty to like, lacking in ideas to keep you guessing throughout its full 34 minute run time but certainly offering plenty of stand out tracks. The band are empowered in their message, so keen clearly to represent something new: an all-inclusive pro-female spirit that wants everyone, regardless of who they are, to find themselves and feel comfortable being themselves.

And they do very, very well to deliver that message; it is evidently a part of who the band want to be. But their music takes on another life in a different context; Dream Wife's debut is a great record, but it really comes into its own when heard live, and when you can see just how much fun the band have playing their music.

It took a few listens but I'm there now , this album goes ok .

The star of the show is no doubt Iceland born vocalist Rakels Mjoll who sounds like BJORK jacked up on whisky and steroids with her quite unique and rather cute vocal range.

Also I'm generally not a lyrics guy but there are some powerful topics covered here which include rape , sexuality and stereotypes and are well worth paying attention to understand .

So yes recommended for sure , currently sits on my Best Of 2018 list and I recon it will probably stay there for the year .

Your feedback for Dream Wife