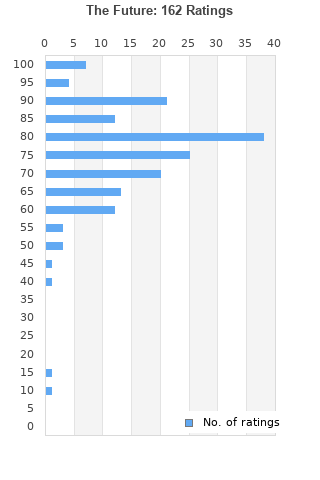 The Future is ranked 6th best out of 27 albums by Leonard Cohen on BestEverAlbums.com.

The best album by Leonard Cohen is Songs Of Leonard Cohen which is ranked number 154 in the list of all-time albums with a total rank score of 10,972. 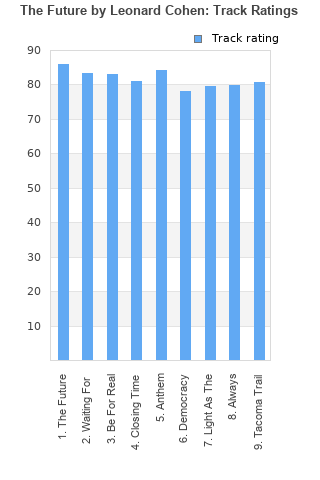 Rating metrics: Outliers can be removed when calculating a mean average to dampen the effects of ratings outside the normal distribution. This figure is provided as the trimmed mean. A high standard deviation can be legitimate, but can sometimes indicate 'gaming' is occurring. Consider a simplified example* of an item receiving ratings of 100, 50, & 0. The mean average rating would be 50. However, ratings of 55, 50 & 45 could also result in the same average. The second average might be more trusted because there is more consensus around a particular rating (a lower deviation).
(*In practice, some albums can have several thousand ratings)
This album is rated in the top 5% of all albums on BestEverAlbums.com. This album has a Bayesian average rating of 76.8/100, a mean average of 76.2/100, and a trimmed mean (excluding outliers) of 77.0/100. The standard deviation for this album is 13.7.

Leonard Cohen's first album of the nineties is another good LP. Employing that gruff voice that he will have for the rest of his Career, Cohen gives us great songs in, waiting for the miracle, and, light as the breeze. Loveliest song though is the cover, be for real, a beautiful track. The future, is not an essential Cohen album, nor his best, but it's still very good.

This album stunned me. Prophetic, apocalyptic, tender and dark. It made me realise just how powerful music can be when it has poetry in the lyrics, and just how lame most song lyrics really are. I read an interview with Mogwai once. They asked them why they don’t write lyrics for their music. They said, “Who can compete with Leonard Cohen?”

An underrated album. Cohen branches out, musing about life and society more than just love and lust. He was gaining momentum later in his career.

Your feedback for The Future