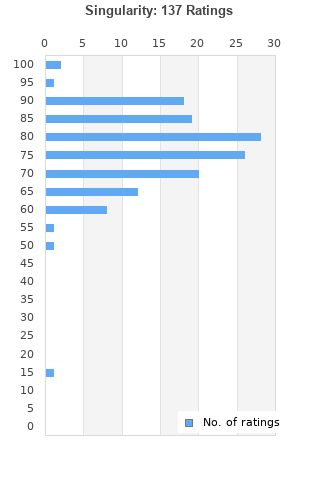 Singularity is ranked 2nd best out of 8 albums by Jon Hopkins on BestEverAlbums.com.

The best album by Jon Hopkins is Immunity which is ranked number 1223 in the list of all-time albums with a total rank score of 1,444. 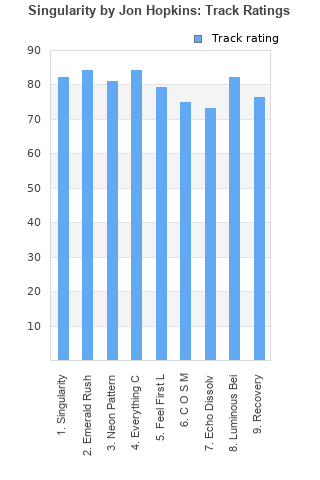 Outliers can be removed when calculating a mean average to dampen the effects of ratings outside the normal distribution. This figure is provided as the trimmed mean. A high standard deviation can be legitimate, but can sometimes indicate 'gaming' is occurring. Consider a simplified example* of an item receiving ratings of 100, 50, & 0. The mean average rating would be 50. However, ratings of 55, 50 & 45 could also result in the same average. The second average might be more trusted because there is more consensus around a particular rating (a lower deviation).
(*In practice, some albums can have several thousand ratings)
This album is rated in the top 6% of albums on BestEverAlbums.com. This album has a mean average rating of 76.0/100. The trimmed mean (excluding outliers) is 76.7/100. The standard deviation for this album is 11.3.

A real thing of beauty.

Really enjoyed this listen. My introduction to Jon Hopkins... I will be seeking more.

This album has some sublime moments but is structurally not as well sequenced as Immunity. The Immunity journey was something quite fresh and had me marveling at Hopkins' technical prowess and sense of a musical reverie. The reverie is still evident here but a little misplaced in parts. I will continue to immerse myself in it to see if I can pick up on something more but at this stage it falls slightly short whilst still being an incredibly pleasant listening experience.

I think I figured out why this album falls short of being great. Its trying too hard to be deep and meaningful.
Its clear from the start that Jon Hopkins is building some sort of narrative and cinematic experience with this album, like going beyond the infinite and witnessing the truth of the universe. The problem is, Jon Hopkins doesnt know when to end it. By the time Feel First Life is over, I have had my emotional catharsis. But the album keeps going. This wouldnt be a problem, but it continues on the same note as Feel First Life ends on, and it never manages to build back up again. The first half is one hell of a ride through black holes, worm holes, different dimmensions and universes up until you break through the reality barrier to find yourself at the edge of it all. And it stays there for the remaining half. Luminous Beings almost brings it back, but its not enough. Its clear that Jon Hopkins is trying to create a transcendent experience here, but I feel he pushed too hard in the wrong direction. There are maybe 3 songs here that could have been something else other than "this is really awe inspiring, please feel awed by it"

I don't listen to much EDM but this one struck me. Really soothing and cleansing even, in a way that still feels fun and frantic.

This album is an amalgam of serenity and fire and it’s bloody great!

Solid! It doesn't reach quite the same level of heights as Immunity, but I felt it worked more efficiently as a whole. Either way, there is some seriuosly great control of atmospheric tones, and muscular (even if repetitive) percussion. Inside this year's top ten so far.

Still good but not up there with Open Eye Signal. Some self-referential stuff in there (not necessarily a bad thing). Danger of repeating himself a bit.

Perhaps not quite as glorious as 2013's "Immunity", but this beautiful record is further proof that 2018 is the year of unexpectedly excellent house music (along with A.A.L's "2012-2017"). The tracks that comprise "Singularity" are gorgeously delicate yet aren't afraid to pack a punch through house beats. This is genuinely thought-provoking dance music with an ambient core, and Hopkins should be championed as the saviour of his genres (which I believe are microhouse and tech-house).

Your feedback for Singularity