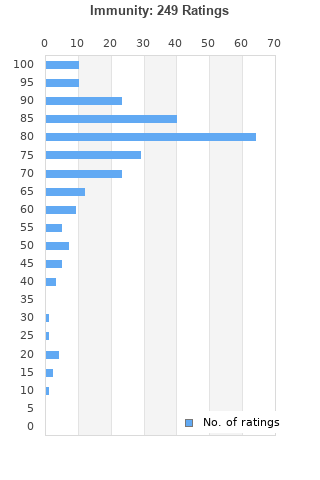 Immunity is ranked as the best album by Jon Hopkins. 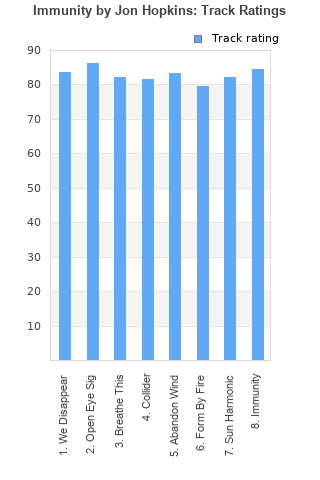 Outliers can be removed when calculating a mean average to dampen the effects of ratings outside the normal distribution. This figure is provided as the trimmed mean. A high standard deviation can be legitimate, but can sometimes indicate 'gaming' is occurring. Consider a simplified example* of an item receiving ratings of 100, 50, & 0. The mean average rating would be 50. However, ratings of 55, 50 & 45 could also result in the same average. The second average might be more trusted because there is more consensus around a particular rating (a lower deviation).
(*In practice, some albums can have several thousand ratings)
This album is rated in the top 7% of albums on BestEverAlbums.com. This album has a mean average rating of 75.0/100. The trimmed mean (excluding outliers) is 76.6/100. The standard deviation for this album is 16.8.

A wonderful record filled with great compositions veering from noise music to techno to house to more ambient influenced numbers. If that sounds jarring, it isn't. Jon Hopkins is clearly a man of great talent to pull all of his influences together to create a seamless piece of work. Each track ranges from very good to excellent, and "Immunity" stands tall because it's simply one of the greatest electronic albums of the decade.

I had been lamenting the fact that I was seeking, yet struggling to find, electronic artists that could have me completely hooked like Burial, Aphex Twin, and Four Tet. These 3 artists had given me a slight addiction to electronic music which had grown, firstly, from my experience of the UK rave scene at the turn of the century, and the fascination with Thom Yorke's experimental forays. Where were the artists that churned out consistently brilliant albums, perhaps displaying a touch of genius in their art? Most albums I delved into were inconsistent or had sections I could easily skip.

But then I stumbled across Immunity while exploring the Metacritic website and was intrigued by the overwhelmingly positive reviews. It grabbed me immediately with its driving baselines and the sizzling, fizzing electronic beats that have you immediately in the zone. It's as if you take off on a journey into outerspace, not in a rocket, but a smooth moving aircraft that breaks through the earth's atmosphere at the midpoint of the album when track 5, Abandon Window, gently appears and you can shut off the engines and drift through space and into a sublime orbit as Form By Firelight, the 6th track takes over. Throughout the album Hopkins has managed to conjure an otherworldly ambience that brings me back to the album whenever I am looking for a complete disengagement from the rat-race.

I have listened to Hopkins' earlier stuff and he seems to be evolving his sound more and more which makes me eager to hear what he produces in future releases.

ALBUM HIGHLIGHT: The sizzling, fizzing beats are at their best on Open Eye Signal.

Love this album. One of the few electronic albums that feels fully mature with depth that rivals that of the indie rock that dominates these charts.

Here's a very consistent work! Open Eye Signal and Collider are super.
Sometimes I associate his ambient side with Sigur Rós, which is not a very good for me, but he can really give it a context and a purpose. He is good!

Stunning album is right. Love the ambience throughout. This album will take you away to another place in time A+ MEZ

Fantastic album with mixture of ambient tracks and more dancefloor orientated stuff. Hopkins is a dab hand at either. Title track is immense.

Funny how everybody says that the ambient tracks are the best on here. I feel the complete opposite.

Listened to this on a long car ride home with all my friends last night. They were blown away and the whole car ride was almost hypnotizing with the repetition and slowly evolving songs. This is an outstanding album that I'll always return to.

The last 2 tracks are incredible

Your feedback for Immunity