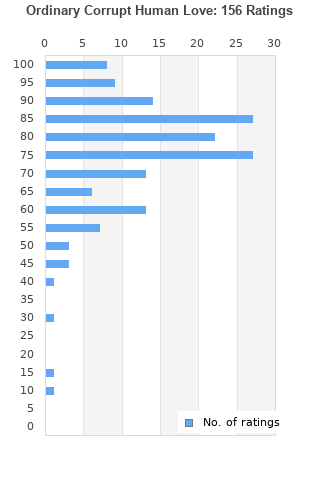 Ordinary Corrupt Human Love is ranked 3rd best out of 5 albums by Deafheaven on BestEverAlbums.com.

The best album by Deafheaven is Sunbather which is ranked number 472 in the list of all-time albums with a total rank score of 4,055. 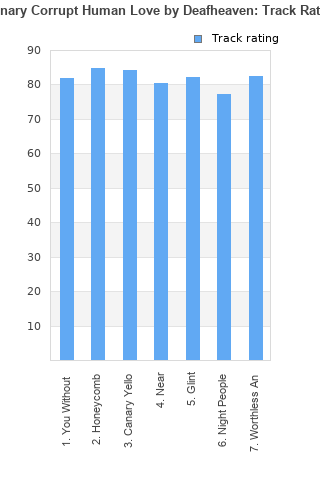 Outliers can be removed when calculating a mean average to dampen the effects of ratings outside the normal distribution. This figure is provided as the trimmed mean. A high standard deviation can be legitimate, but can sometimes indicate 'gaming' is occurring. Consider a simplified example* of an item receiving ratings of 100, 50, & 0. The mean average rating would be 50. However, ratings of 55, 50 & 45 could also result in the same average. The second average might be more trusted because there is more consensus around a particular rating (a lower deviation).
(*In practice, some albums can have several thousand ratings)
This album is rated in the top 5% of albums on BestEverAlbums.com. This album has a mean average rating of 76.0/100. The trimmed mean (excluding outliers) is 77.4/100. The standard deviation for this album is 15.8.

My introduction to some of the songs (Honeycomb, Worthless Animal) came from Audiotree (awesome camerawork and performance!) I feel like this is a more diverse album than sunbather. I get an m83 vibe from You Without End, and I feel like there's even some jazz influences in there, something we didn't have with sunbather.

While I don't think this album is "as good" as Sunbather, I think there's something here towards progressing metal that sunbather didn't have.

Maybe not quite on Sunbather level, but still an excellent record. Even more mellow post-rock sound and less black metal, which is ok cause it still works very well.

Opener "You Without End" was jarring on first listen but I get it now , followed by the 11 minute "Honeycomb" which is a searing beast that rises and falls and is everything why we love Deafheaven , in fact every track here is great

Is it 'Sunbather' ? Nope

Is it better than 'New Bermuda' ? Yep

It seems that Deafheaven's method for evolving their sound is to distill the post-rock influences even further. I personally think this album doesn't quite measure up to the previous two, but it's still a good one. Its highs measure up nicely but a couple of the tracks don't do it for me.

This album has successfully managed to open my eyes (or ears rather..) to metal vocals. I've never liked metal vocals, EVER. This one did it for me.

After the first couple listens I kept telling myself that an instrumental version of the album would be perfect, however every listen since then has gotten better and better to the point where I would much rather the vocals be included.

Although I can't make out a single word, the gatefold sleeve of the record has the lyrics written out nice and big for reading along if you really feel the need to. This is the perfect mix of shoegaze and post-rock. I'd say black-metal too however I cannot attest to this as I've honestly never listened to the genre.. (Don't hate me :D)

All in all, I applaud Deafheaven for opening me up to a style of vocals that I've been trying for years and years to get into. Please come at me with recommendations of what to try out next.

It had some parts that definitely didn’t work that well, but many others that did. As a whole it still doesn’t feel like quite as astounding and cohesive a project as their opus at all.

Also, for those that don’t enjoy the growled vocals, all I can say is keep listening to them. There is not a single person that hears those the first time and thinks “oh that’s nice and pleasant”. It just takes time to get used to. For me I just listened to Sunbather so much that I just got past that aversion, and now I even kinda like it!

I am not a fan of death growls at all, but the melodies on this album are pretty memorable. One of this year best albums. 8/10.

Is there any other black metal acts that make music not only exciting but also blissful? Because if there was an opponent that could possibly take away the album of the year crown from Kamasi, it's probably this. Because I don't find anything wrong from this. I find it fucking incredible.