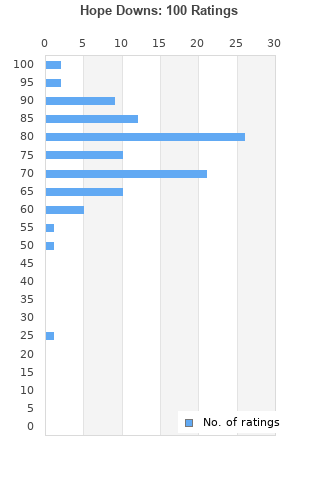 ROLLING BLACKOUTS COASTAL F...-HOPE DOWNS (UK IMPORT) VINYL LP NEW
Condition: New
Time left: 2d 17h 35m 13s
Ships to: Worldwide
$33.12
Go to store
Product prices and availability are accurate as of the date indicated and are subject to change. Any price and availability information displayed on the linked website at the time of purchase will apply to the purchase of this product.  See full search results on eBay

Hope Downs is ranked as the best album by Rolling Blackouts Coastal Fever. 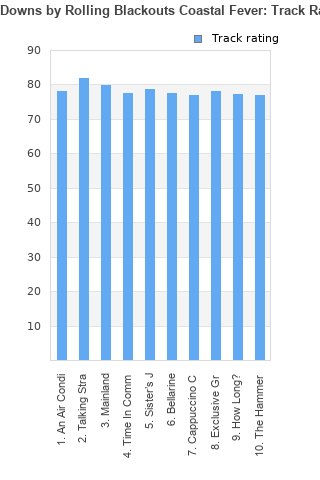 Rating metrics: Outliers can be removed when calculating a mean average to dampen the effects of ratings outside the normal distribution. This figure is provided as the trimmed mean. A high standard deviation can be legitimate, but can sometimes indicate 'gaming' is occurring. Consider a simplified example* of an item receiving ratings of 100, 50, & 0. The mean average rating would be 50. However, ratings of 55, 50 & 45 could also result in the same average. The second average might be more trusted because there is more consensus around a particular rating (a lower deviation).
(*In practice, some albums can have several thousand ratings)
This album is rated in the top 8% of all albums on BestEverAlbums.com. This album has a mean average rating of 76.0/100. The trimmed mean (excluding outliers) is 76.5/100. The standard deviation for this album is 10.7.

Although it is similar to a lot of indie music, it is still a catchy and upbeat album that stays consistent all the way through

I love artists who name check their heritage , bands such as Wilco (Chicago) , The Replacements (Minnesota) and The Go-Betweens (Brisbane) quickly come to mind and now you can add Melbourne's R.B.C.F to the list with the wonderful 'Hope Downs' with these examples:

Track 1: "An Air-Conditioned Man"
Lyric: 'Under the Jacaranda'
Explained: a Jacaranda tree is a popular tree within Australian gardens , interestingly is not a native

Track 5: "Sister Jeans"
Lyric:'Down along Sydney Road'
Explained: Sydney Road is a major road in Melbourne , unsurprisingly it travels north towards Sydney some 878kms / 545 miles away

Track 6:"Bellarine"
Lyric: ' My Bellarine from here I shoot my scene'
Explained: The Bellarine Peninsular is peninsular SW of Melbourne

Hope Downs is easily one of 2018's best Australian albums

Yeah the songs are all pretty good and they're clearly talented, I could see why this album could be seen as a pleasent surprise for fans of it's style but not getting the messianic hype at all. While never a weak moment or song there also wasn't anything that felt really new or vital. Solid but perhaps exceedingly high expectations have personally put a damper on this one, maybe something will spark with repeat listens, donno.

It's jangly and uptempo indie-pop. It's not original but it is ok.

Soon to become the jangle pop album of our generation. RBCF's clean, summery debut is as warm as its album artwork implies, with youthful spirit and a gorgeously jangly pop rock feel.

Compared to the vast majority of indie albums of recent times, this one stands out beautiful with the depth of its production and its fantastic guitar riffs, which I could write about extensively for each individual track.

A pre-packaged summer soundtrack, who's detail will ensure this is remembered as one of 2018s best releases by far.

Your feedback for Hope Downs