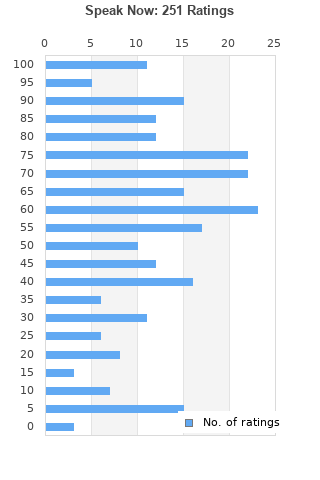 Speak Now
Condition: Acceptable
Time left: 1h 45m 59s
Ships to: Worldwide
$5.47
Go to store
Product prices and availability are accurate as of the date indicated and are subject to change. Any price and availability information displayed on the linked website at the time of purchase will apply to the purchase of this product.  See full search results on eBay

Speak Now is ranked 4th best out of 12 albums by Taylor Swift on BestEverAlbums.com.

Look What You Made Me Do: The Taylor Swift Dance Party
Gramercy Theatre, New York, United States. 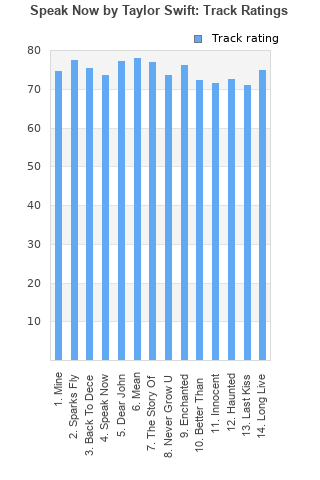 Rating metrics: Outliers can be removed when calculating a mean average to dampen the effects of ratings outside the normal distribution. This figure is provided as the trimmed mean. A high standard deviation can be legitimate, but can sometimes indicate 'gaming' is occurring. Consider a simplified example* of an item receiving ratings of 100, 50, & 0. The mean average rating would be 50. However, ratings of 55, 50 & 45 could also result in the same average. The second average might be more trusted because there is more consensus around a particular rating (a lower deviation).
(*In practice, some albums can have several thousand ratings)
This album has a Bayesian average rating of 56.4/100, a mean average of 55.7/100, and a trimmed mean (excluding outliers) of 55.7/100. The standard deviation for this album is 27.3.

Found this cd in my dad's collection. My sister bought it eight years ago for her birthday when she was 8. There isn't even a scratch on it, and I feel guilty even ripping this considering the ass Swift is especially now.

This is her best album. The lyrics are very good, the melodies nice and overall it's a consistent and enjoyable album to listen to, start to finish, I don't even notice how long it is. The only track I don't really like is Last Kiss. Ours, Mine, Sparks Fly, Back to December, Speak Now, Dear John, Innocent, Enchanted and Long Live are my favorite tracks.

According to the album credits she is the sole songwriter for all tracks. Pretty uncommon these days especially for someone at her stature. This is before she made it to her current level but man can she pump 'em out, and at high quality too. Better Than Revenge and Speak Now are my favorites. She really struts her stuff on this one

My wife loves her.

There are a few good songs here.

Reading comments for this album, all I can think about this site is that people here either have a great sense of humor, an awful taste or are completely nuts. Taylor Swift a great songwriter? Please tell me you're joking.

Great songwriting and terrific hooks. I think this album will get more credit in the future when it came stand on its own legs apart from the Taylor Swift aura. She really can write catchy and heartfelt pop songs.

Really, not one bad song, many incredibly good ones

Hands down, this makes my top ten of all time. Three words: Emotion, emotion, emotion. And it would actually require more than that to capture the different types of it that are on this album. From the gut-wreching bitterness of Dear John, to the epic euphoria of Enchanted, to the heated intensity of Better Than Revenge, to the dark despair of Last Kiss, to the optimistic sorrow of Long Live, if you're open to it, this album will tear your heart out. There isn't a weak moment on the entire album. There are several songs that are simply enjoyable- really enjoyable actually- but if that's the closest I can come to saying this album has a weak point, that's pretty good. Most of these songs are important, in different ways. I've never heard a better combination of music and lyrics combined to convey emotion on an album. Taylor chooses her lyrics very carefully, as so many lines paint a specific emotion that tells the story of a different situation Taylor had encountered in order to feel what she is conveying here. It's easy to look at her biggest demographic and discount her based on that, but who was Elvis's biggest demographic? The Beatles? Plus, it is kind of ironic that someone used auto tune and a teen audience as two argument to discount Taylor, shortly after defending Kanye West, because he's not familiar to either of those things. I enjoyed his album, just don't defend it by criticizing another album for things that can also apply to the album you're defending. If you don't appreciate Taylor's album as I have, I can respect that, but for the benefit of anyone who chooses to listen to this album, I hope you have the same experience I have had with this album, because it's something everyone should have the privilege of feeling. An absolute masterpiece.

Your feedback for Speak Now