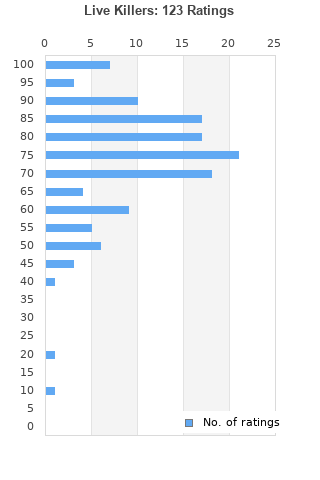 Live Killers by Queen (CD, Oct-1991, 2 Discs, Hollywood)
Condition: Acceptable
Time left: 12h 7m 5s
Ships to: Worldwide
$13.99
Go to store
Product prices and availability are accurate as of the date indicated and are subject to change. Any price and availability information displayed on the linked website at the time of purchase will apply to the purchase of this product.  See full search results on eBay

Live Killers is ranked 19th best out of 49 albums by Queen on BestEverAlbums.com.

The best album by Queen is A Night At The Opera which is ranked number 95 in the list of all-time albums with a total rank score of 16,204. 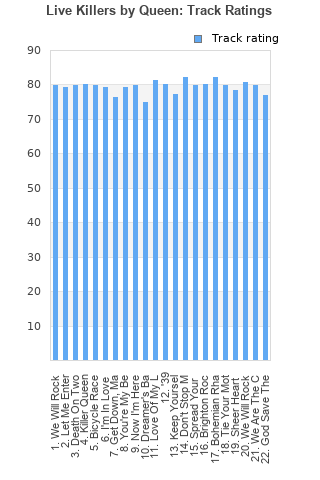 Rating metrics: Outliers can be removed when calculating a mean average to dampen the effects of ratings outside the normal distribution. This figure is provided as the trimmed mean. A high standard deviation can be legitimate, but can sometimes indicate 'gaming' is occurring. Consider a simplified example* of an item receiving ratings of 100, 50, & 0. The mean average rating would be 50. However, ratings of 55, 50 & 45 could also result in the same average. The second average might be more trusted because there is more consensus around a particular rating (a lower deviation).
(*In practice, some albums can have several thousand ratings)
This album is rated in the top 17% of all albums on BestEverAlbums.com. This album has a Bayesian average rating of 75.0/100, a mean average of 74.1/100, and a trimmed mean (excluding outliers) of 75.1/100. The standard deviation for this album is 15.4.

Queen's classic live album. It's not available as part of the band's 40 year anniversary remaster editions. I suppose in this day and age of full gigs plus DVD makes albums like this obsolete. Still, it's an enjoyable record, with some fine performances. I especially like the acoustic part of the LP, with, '39, in particular a highlight, as well as, dreamers ball, and, love of my life. It's a rollicking live album, although certainly not a great live record, but for long term Queen fans there is always a certain amount of affection for this release. A live CD/DVD edition of a live killers era gig would be more than welcome.

It's a shame this live album was produced just a little after this bands prime. Poorly recorded and mixed this is a pail reflection of the greatness that was.

Live Killers was the first live album by Queen. Released after the Jazz album, it's a time for the band when they were about to go through a serious change...from the adventurous and risk taking music they had made throughout the 70's to a more conventional sound and the use of synthesizers. This 2 disc album plays like a greatest hits set, with everything you could have hoped for from Queen in 1979. The mix is bad, the sound is not great, but it does accomplish what a live album should. It makes you wish you were there.

Queen's live albums also showed the limitations of Freddie Mercury's voice, but he still gives it his all. Most of the songs stay close to the studio versions ("Brighton Rock" does not, as Brian May goes off for about 9 minutes). Overall, it's a good document of the band at their height putting on a pretty good show. You'd never know that they were about to release Flash Gordon....

Your feedback for Live Killers