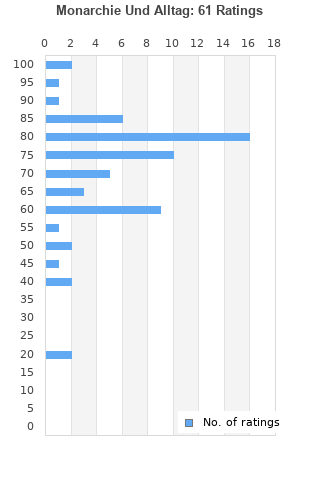 Fehlfarben -Monarchie Und Alltag GER LP 1980 + Innerbag (VG+/VG+) '*
Condition: Used
Time left: 13d 14h 26m 47s
Ships to: Worldwide
$18.49
Go to store
Product prices and availability are accurate as of the date indicated and are subject to change. Any price and availability information displayed on the linked website at the time of purchase will apply to the purchase of this product.  See full search results on eBay

Monarchie Und Alltag is ranked as the best album by Fehlfarben. 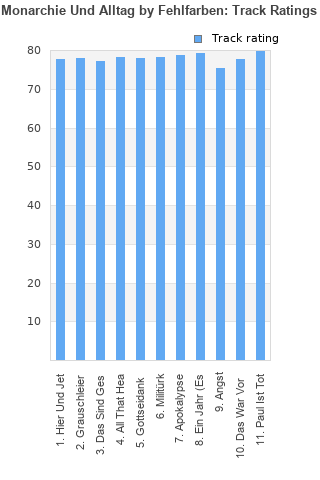 Rating metrics: Outliers can be removed when calculating a mean average to dampen the effects of ratings outside the normal distribution. This figure is provided as the trimmed mean. A high standard deviation can be legitimate, but can sometimes indicate 'gaming' is occurring. Consider a simplified example* of an item receiving ratings of 100, 50, & 0. The mean average rating would be 50. However, ratings of 55, 50 & 45 could also result in the same average. The second average might be more trusted because there is more consensus around a particular rating (a lower deviation).
(*In practice, some albums can have several thousand ratings)
This album has a Bayesian average rating of 72.4/100, a mean average of 70.4/100, and a trimmed mean (excluding outliers) of 72.3/100. The standard deviation for this album is 15.9.

Fehlfarben is a German band that I have never really appreciated. This album is one of the first records of the post-punk movement. Even though the group does not create memorable music, it is very important in the history of Rock. This album is very often forgotten today while he was very influential in the German movement Neue Deutsche Welle and in the German punk scene. I recommend this little classic.

The best punk album to goosestep to, according to my ex-neighbor (he was nocturnal). "Ein Jahr" is der fuhrer here but all the tracks are masterful. I got this album in an attempt to culture myself before traveling, and now it reminds me of walking around Germany, infuiriatingly suppressing the urge to heil in every picture.

ancestors of ndw (neue deutsche welle). still doesn't click on me after all those years. imo a brainchild.

Your feedback for Monarchie Und Alltag