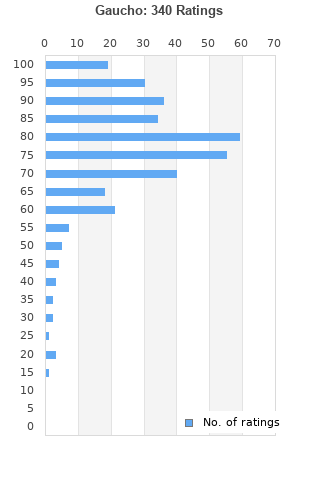 Gaucho is ranked 3rd best out of 21 albums by Steely Dan on BestEverAlbums.com.

The best album by Steely Dan is Aja which is ranked number 182 in the list of all-time albums with a total rank score of 9,598. 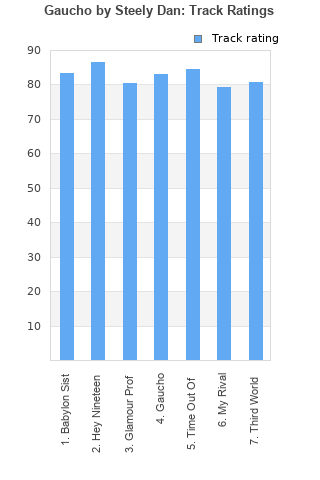 Rating metrics: Outliers can be removed when calculating a mean average to dampen the effects of ratings outside the normal distribution. This figure is provided as the trimmed mean. A high standard deviation can be legitimate, but can sometimes indicate 'gaming' is occurring. Consider a simplified example* of an item receiving ratings of 100, 50, & 0. The mean average rating would be 50. However, ratings of 55, 50 & 45 could also result in the same average. The second average might be more trusted because there is more consensus around a particular rating (a lower deviation).
(*In practice, some albums can have several thousand ratings)
This album is rated in the top 3% of all albums on BestEverAlbums.com. This album has a Bayesian average rating of 77.9/100, a mean average of 77.0/100, and a trimmed mean (excluding outliers) of 78.1/100. The standard deviation for this album is 15.5.

One of the best Steely Dan albums. Probably their most laid back and breathable.

These guys can't do no wrong and certainly not on this album which contains a few of their best tracks: Babylon Sisters and Hey Nineteen: completely laidback and very good at the same time.

There is a lot of merit in Steely Dan's seventh studio album, their follow-up to their brilliant "Aja" album, and their last until their reunion album in 2000.

While Aja was loose and lavish, Gaucho is uptight and glossy. Even though the production doesn't mesh with the material as well as it did on Aja, it is still top notch production.

All the songs here are lovely, as good as anything Steely Dan has ever released, even if it is often overlooked. The title track is probably the most beautiful and heartfelt song the band ever recorded.

Apparently the final track was lifted from The Royal Scam sessions.

For a bonus, look up the lost track "The Second Arrangement," which was accidentally erased in the Gaucho recording session.

For best results, accompany album with Cuervo Gold and a fine "Columbian."

I couldn't get enough of this album growing up. Steely Dan has their own thing going on

Not a bad album, but well below what we'd come to expect from the Dan up to this point. A lot less unique brilliance and a lot more going through the motions.

This is the SD album that gets played the most and I have most there albums.

Picking up where, aja, left off. Again, it's a super slick jazz pop album which didn't appear for three years after it's predecessor. Gaucho, tends to be overlooked, maybe it is that three year gap, but it's certainly up there with their other records. Hey nineteen, and, Babylon sisters, are obviously standouts, but best track, in my opinion, is the excellent title track. There's no doubting that the first half of this LP is stronger than the second half. Steely Dan were one of the best bands(you know what I mean)of the seventies, and although Donald Fagen released the sublime, the nightfly, i do think Fagen and Becker called it a day at the right time. Gaucho, is a great swan song(you know what I mean).

Gaucho is my favorite Steely Dan Album. Some other commenter have listed their favorite songs from the album and strangely enough, the ones that the listed as being the weaker songs might actually be my favorites. "Time Out of Mind" is just perfection. Michael McDonald singing harmony with Fagan is just plain gorgeous. The subtle guitar licks on the fade out are memorable.

The title track is captivating with its weirdness. "Who is the gaucho amigo? Why is he standing in you spangled leather poncho?"

"Glamour Profession" is another that I found myself listening to repeatedly from the beginning .

A wonderful (false) denoument to Steely Dan's recording career. At first blush it sounds like a subdued rehash of Aja, but stick with it and you'll unlock the beauty within. Yes, the cast of characters that populate the lyrics range from the pathetic to the bizarre, but you still find yourself wishing you knew these people. "Turn that jungle music down. Just until we're out of town."

Musically, Becker and Fagen surrounded themselves with the same high-octane session players as on Aja and the results are the same. All the players shine when given a chance. "Hey Nineteen" has always been my favorite tune by Steely Dan but each track has its worth and together they create a true album experience.

Your feedback for Gaucho