Sandinista! (studio album) by The Clash 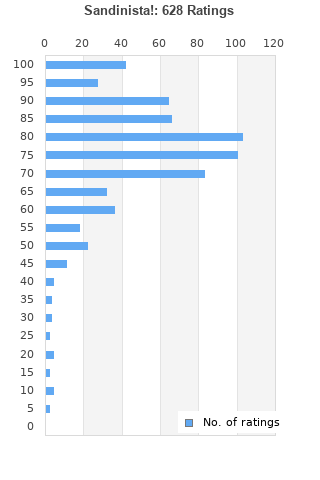 Sandinista! is ranked 3rd best out of 18 albums by The Clash on BestEverAlbums.com.

The best album by The Clash is London Calling which is ranked number 19 in the list of all-time albums with a total rank score of 43,099. 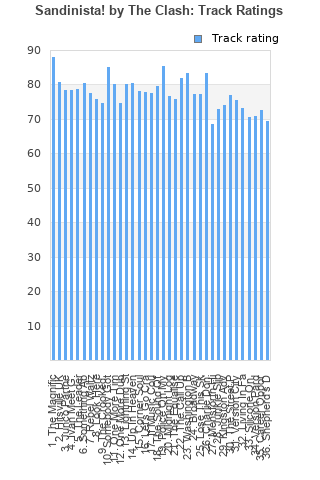 Rating metrics: Outliers can be removed when calculating a mean average to dampen the effects of ratings outside the normal distribution. This figure is provided as the trimmed mean. A high standard deviation can be legitimate, but can sometimes indicate 'gaming' is occurring. Consider a simplified example* of an item receiving ratings of 100, 50, & 0. The mean average rating would be 50. However, ratings of 55, 50 & 45 could also result in the same average. The second average might be more trusted because there is more consensus around a particular rating (a lower deviation).
(*In practice, some albums can have several thousand ratings)
This album is rated in the top 6% of all albums on BestEverAlbums.com. This album has a Bayesian average rating of 76.3/100, a mean average of 75.0/100, and a trimmed mean (excluding outliers) of 76.4/100. The standard deviation for this album is 16.6.

With album could have been three times shorter and then it would be really great, but there is too much experimental or pointless tracks that drags out this album to this length. I would like to highlight the best tracks that in my opinion would create better album without other ones:
The Magnificent Seven
Ivan Meets G.I. Joe
Something About England
Somebody Got Murdered
One More Time
Lightning Strikes
Up In Heaven
The Sound Of Sinners
Police On My Back
The Call Up
Washington Bullets
Charlie Don't Surf

It's Long, but it's Really good. Some big highlights, and allthough its long, most off the songs are enjoyable. Someone mentioned this is the most ambitious project ever, and i agree. Too ambitious, but still good. Worth a listen.

Best Songs: Somebody got Murdered, the magnificent Seven

the skip button is your best friend here. It's 50-50. Some amazing tracks, some fun tracks and some skippable tracks.

The Clash are always capable of some great songs, but this album and the individual tracks themselves often felt self-indulgently long and tedious.

A very uneven album. It doesn't reach the brilliance of London Calling, but some of the album's best moments (The Magnificent Seven, Police On My Back, Somebody Got Murdered, Charlie Don't Surf, etc.) come close. But for every standout gem like Ivan Meets G.I. Joe or The Call Up, there's rubbish like Lose This Skin or a completely unnecessary track like One More Dub. Just too long and too experimental for its own good. There is a fantastic single album and a solid double album hiding in here somewhere. But as a triple album over two hours in length, it's difficult to listen through in one sitting.

Yes, it is quite long, however it's very much part of its charm. It makes every re-listen just as exciting and fresh as the first time. It's a record that grows on you. It's not as concise as the previous, but it wasn't trying to be. It retains the diversity and wit of the previous it extends on what they built upon and created more experimental, ambitious, and unique songs that still sound catchy to the untrained ear. It is severely underrated album in my opinion and should get more recognition and praise which it so deserves

I don't think there is an album out there that grows more exponentially after every listen. I understand the criticism of its sprawling length but it is tremendous.

Album was way too long. There were several songs I could have done without (One More Time, One More Dub, If Music Could Talk, the entire Side Six). That said, this was an awesome, ambitious album.

The most ambitious album ever, perhaps. Yes, a lot of it is questionable, but it's remarkably consistent for its sprawling length, and it has more good songs than any other album ever made, by my count. (Even more impressive that London Calling is #2 by that measure... what an era)

Your feedback for Sandinista!