Boy (studio album) by U2 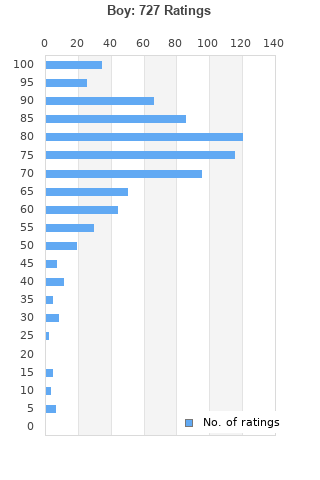 Boy is ranked 5th best out of 33 albums by U2 on BestEverAlbums.com.

The best album by U2 is The Joshua Tree which is ranked number 50 in the list of all-time albums with a total rank score of 22,616. 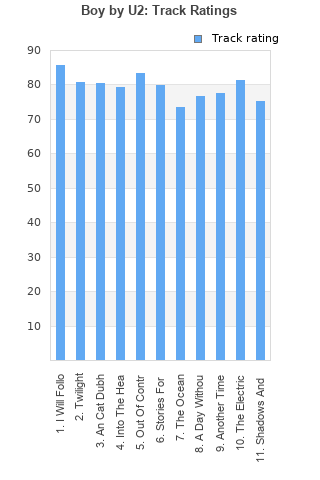 Rating metrics: Outliers can be removed when calculating a mean average to dampen the effects of ratings outside the normal distribution. This figure is provided as the trimmed mean. A high standard deviation can be legitimate, but can sometimes indicate 'gaming' is occurring. Consider a simplified example* of an item receiving ratings of 100, 50, & 0. The mean average rating would be 50. However, ratings of 55, 50 & 45 could also result in the same average. The second average might be more trusted because there is more consensus around a particular rating (a lower deviation).
(*In practice, some albums can have several thousand ratings)
This album is rated in the top 16% of all albums on BestEverAlbums.com. This album has a Bayesian average rating of 75.0/100, a mean average of 73.8/100, and a trimmed mean (excluding outliers) of 75.0/100. The standard deviation for this album is 16.8.

I love post-punk and it's very good debut album.

The beginnings of the incredible guitar sound The Edge can produce. The best was definitely still to come. First half is great, second half is quite forgettable. My highlights are Twilight and I Will Follow.

A great record - I got into U2 about 83 so missed this on release but soon caught up. I loved the energy, the guitar sound. The first 3 albums are all that post-punk youthful energy before they move onto their next phase probably at Unforgettable Fire.

Post-punk U2, Joshua Tree U2, Achtung Baby U2 and ALTYCLB U2 are all different bands to me.

Its is a good album, when you consider how early in their development as a band it was released. By the time WAR was released they had moved to higher level.

Not my favorite, nut my mom’s favorite album of all time

I find this debut a sheer delight. The bouncy excitement mixed with teenage fear of Bono's voice and that first taste of Edge's treble heavy guitar lines. It's beautiful. Naive of course, but what do you expect from 20 year olds? The Ocean sounds far too sophisticated for a group their age, and Shadows and Tall Trees is an echoing nightmare. Electric Co is terrifying and thrilling in equal measure. There's simply not a song I don't love.

A brilliant debut album. The production for this was spot on

This album reminds me of "The Piper At The Gates Of Dawn" by Pink Floyd because, just like Pink Floyd's first album, U2's first album is very different from the style that's going to make them famous later. Both those bands' first album are awesome, unique and full of energy. Plus, they both make a great use of the guitar with a surf rock sound at some point.

I really like this album from beginning to end, especially "Twilight", "An Cat Dubh" and "The Electric Co.". Right now, it's my second favorite U2 album, second to "War" only. Don't overlook it!

Your feedback for Boy