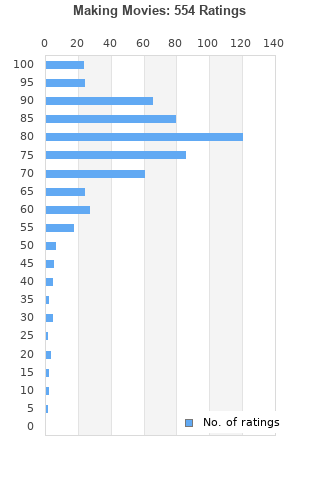 Making Movies is ranked 2nd best out of 16 albums by Dire Straits on BestEverAlbums.com.

The best album by Dire Straits is Brothers In Arms which is ranked number 223 in the list of all-time albums with a total rank score of 8,246. 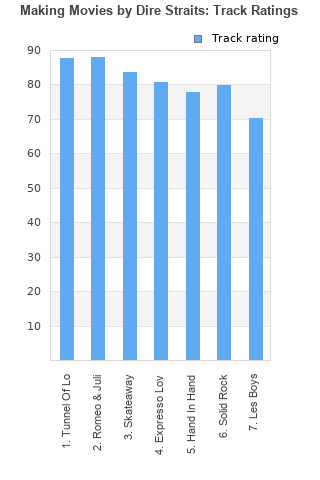 Rating metrics: Outliers can be removed when calculating a mean average to dampen the effects of ratings outside the normal distribution. This figure is provided as the trimmed mean. A high standard deviation can be legitimate, but can sometimes indicate 'gaming' is occurring. Consider a simplified example* of an item receiving ratings of 100, 50, & 0. The mean average rating would be 50. However, ratings of 55, 50 & 45 could also result in the same average. The second average might be more trusted because there is more consensus around a particular rating (a lower deviation).
(*In practice, some albums can have several thousand ratings)
This album is rated in the top 3% of all albums on BestEverAlbums.com. This album has a Bayesian average rating of 77.9/100, a mean average of 76.6/100, and a trimmed mean (excluding outliers) of 78.0/100. The standard deviation for this album is 14.9.

Great album, 1st side is incredibly strong and then it goes down, but it doesn't matter because Tunnel Of Love is one of their best songs and best songs ever.

I love this album for many reasons, we used to listen to this with my friends so many times.
It brings back memories, plus it is DS best album, It 4 definite bangers + few very good songs and only one song that is mediocre.
Bangers: Tunnel of Love, Espresso Love, Romeo and Juliet, Solid Rock!.
Tunnel of love has one of the most beautiful and song-serving guitar solos ever.

A lot of the songs don't sound all that different from their debut. Tunnel of Love is great, but songs 4, 5, & 6 are pretty generic sounding. Not to mention Les Boys....

First listen in over 30 years. Been on a bit of a dire straits listening binge (1st two albums only) and this was obviously next. What I love about the first two was the feel, atmosphere, groove, production etc. which start to get lost going forward, starting here. Dave knopfler has already gone, they added keys and the production is much more polished. Track one certainly hits the spot but where the songs aren't mega like that, there's not that all round feel to enjoy. Even Romeo and Juliet is a little too much for me and goes on a bit long, though it is good. Les boys is a bad joke. Next they lost their drummer and their stadium conquering destination assured, with bigger songs and bigger production with more adult rock, sting, MTV, headbands and microwave ovens. Good album but give me the first two any day.

I can't really think of a better side 1 to an album. Side 2 is not too shabby either and I know Les Boys is rubbish but i still like it

Your feedback for Making Movies