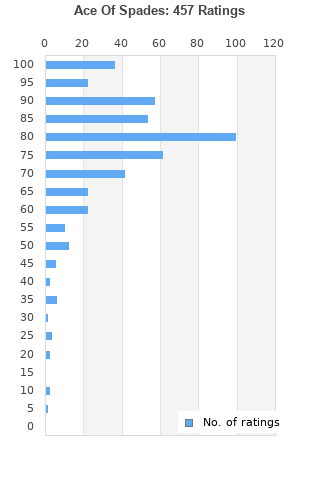 Ace Of Spades is ranked as the best album by Motörhead. 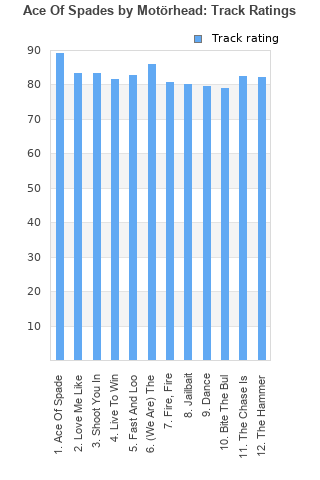 Rating metrics: Outliers can be removed when calculating a mean average to dampen the effects of ratings outside the normal distribution. This figure is provided as the trimmed mean. A high standard deviation can be legitimate, but can sometimes indicate 'gaming' is occurring. Consider a simplified example* of an item receiving ratings of 100, 50, & 0. The mean average rating would be 50. However, ratings of 55, 50 & 45 could also result in the same average. The second average might be more trusted because there is more consensus around a particular rating (a lower deviation).
(*In practice, some albums can have several thousand ratings)
This album is rated in the top 3% of all albums on BestEverAlbums.com. This album has a Bayesian average rating of 78.3/100, a mean average of 77.3/100, and a trimmed mean (excluding outliers) of 78.4/100. The standard deviation for this album is 15.9.

This record hasn't aged brilliantly and it is quite a boring listen once you get past 3 or 4 songs. This is because the style and performances are near enough identical from song to song so the lack of variation gets dull pretty quick. The energy in the music seems to slowly drift away as well as you become more familiar with the sound and see they are just repeating themselves. For that first chunk at the start it is fantastic though as it does feel full of passion and life and that leads to some great songs. Overall, this record feels dated now and despite having some brilliant moments it is quite bare and repetitive for me.

Meh. Not my favorite

This album defines speed metal and what I would call punk metal - mixing punk simplicity and agressivness with metal speed and themes. This is banger after banger after banger. The songs aren't lyrical masterpieces but this is not what they supposed to be. Favorites: Ace Of Spades, Shoot You In The Back, Fire Fire, Jailbait and The Chase Is Better Than The Catch.

Hits hard like only the best power trios, but it's all pretty self-similar and so dated lyrically.

I think Overkill has the edge on this album but without doubt the opener takes some beating. Raw, loud, wall to wall power. There is some great guitar work on the album which goes beyond the power riffery they were so noted for.

For those who may be interested, I picked up a Psychedelic album before Christmas by a band called Sam Gopal, album title Escalator. If you want to hear Lemmy (Ian Willis) in a very different place, even pre-Hawkwind then give it a listen. He played lead and rhythm guitar on the album!

A heavy rock/metal classic. All killer, no dud tracks on this at all. Very sad, they're all dead now

What's there to say about this record - it's loose, it's loud, it's nasty, it's intense, and most of all - it's rock and roll. Only 2 or 3 tracks I wouldn't call Motorhead classics, and even then they're still pretty good.

Favorite Tracks:Shoot You In The Back, Jailbait, Bite The Bullet, The Chase Is Better Than The Catch

Your feedback for Ace Of Spades