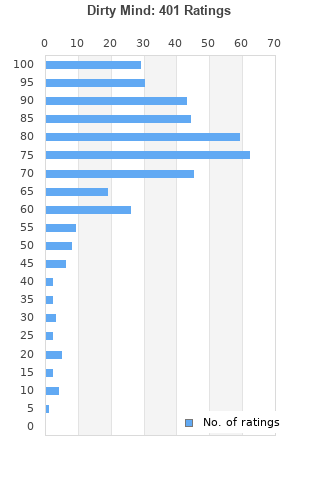 Dirty Mind is ranked 3rd best out of 60 albums by Prince on BestEverAlbums.com.

The best album by Prince is Sign 'O' The Times which is ranked number 192 in the list of all-time albums with a total rank score of 9,505. 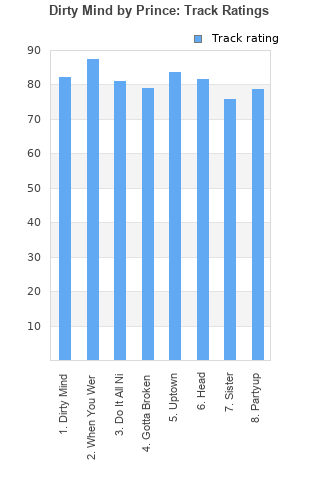 Rating metrics: Outliers can be removed when calculating a mean average to dampen the effects of ratings outside the normal distribution. This figure is provided as the trimmed mean. A high standard deviation can be legitimate, but can sometimes indicate 'gaming' is occurring. Consider a simplified example* of an item receiving ratings of 100, 50, & 0. The mean average rating would be 50. However, ratings of 55, 50 & 45 could also result in the same average. The second average might be more trusted because there is more consensus around a particular rating (a lower deviation).
(*In practice, some albums can have several thousand ratings)
This album is rated in the top 4% of all albums on BestEverAlbums.com. This album has a Bayesian average rating of 77.6/100, a mean average of 76.0/100, and a trimmed mean (excluding outliers) of 77.7/100. The standard deviation for this album is 17.8.

Fun album, but not much lasting impact. The production is pretty lo-fi and can sometimes detract from the songs. "When You Were Mine" remained one of his best songs, and it's a taste of what's to come.

One of his very best records. It's a great listen, but the last two tracks drag a little bit.

Prince entered the 80s not playing around at all. This might prove to be my favorite overall Prince album.

Just a great funk-pop record. Definitely of its time but a good listen

The music is definitely great, but the vocals range from adequate to downright bad, a particular lowlight is "When You Were Mine".

Holy shit. This is so good. I thought 1999 was great, I think this might be Prince's best, excluding Purple Rain. One of the grooviest albums I've ever heard. Prince is an underrated guitarist, but he's an even more underrated bassist. Listen to Uptown and try not to bop your head, I DARE YOU! New favorite Prince album for sure.

I made up my mind: This is the best album ever made. I can't get over it.

It deserves a 10/10 for inventing a style that is sufficiently different from its past and that impacts its future so greatly. A style that mixes funk and rock until the beat is almost four-on-the-floor; a style that relies on the very timbre of the percussion; a style that constantly risks everything by de-emphasising every part of the orchestration.

And the album just perfectly showcases it. It showcases the sound he proposes, and he shows everything you can do with it, without it ever getting boring. It successfully shows the style can be used on a different genre too ('When You Were Mine' which has a new wave beat or the ballad on 'Gotta Broken Heart Again'). And it even has its perfect flaw ('Sister' which is just a mess, which makes the message even more shocking).

It has a consistent lyrical theme that evokes the exact emotion the music also channels, and the lyrics themselves focus on impacting the listener immediately. No deep thinking, just pure emotions, like art should be. When he does get political, he just states as it is ("She's just a victim of society") and leaves it at that. He doesn't muddy the words with arguments (ten points for who gets the reference). You're either with him or not, now's not the time to discuss.

It does the one thing art is supposed to do: Make you feel something in a way you weren't yet familiar with.

Here we have an artist that you can leave alone in a studio for 1 week and he alone get you an album, he sings, composes, play all instruments and chores, mix and produce

This album is no an exception for Prince talent

I don't really care for some of the hypersexual content (repeating the "Do it all night" chorus ad nauseam for instance, or perhaps the incestuous "Sister"), nonetheless "Dirty Mind" is a solid improvement over "Prince" which was itself a solid improvement over his debut "For You". This record is the very definition of short and sweet; its innovative, funky, new-wave inflected production makes my ears happy ! That's all there is to it really. My favourite tracks here are the deliciously sounding "Uptown" and the devilish gem "Head".

Your feedback for Dirty Mind