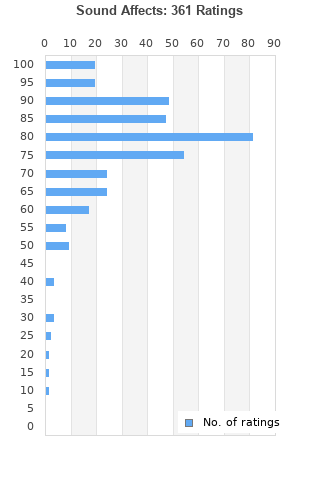 Sound Affects is ranked 2nd best out of 20 albums by The Jam on BestEverAlbums.com.

The best album by The Jam is All Mod Cons which is ranked number 704 in the list of all-time albums with a total rank score of 2,635. 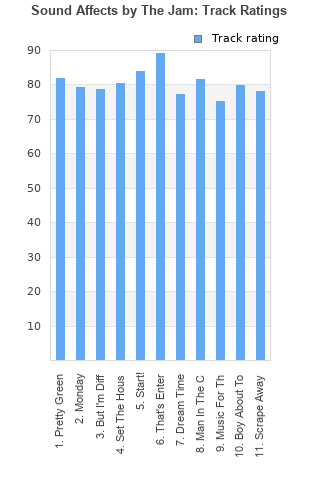 Rating metrics: Outliers can be removed when calculating a mean average to dampen the effects of ratings outside the normal distribution. This figure is provided as the trimmed mean. A high standard deviation can be legitimate, but can sometimes indicate 'gaming' is occurring. Consider a simplified example* of an item receiving ratings of 100, 50, & 0. The mean average rating would be 50. However, ratings of 55, 50 & 45 could also result in the same average. The second average might be more trusted because there is more consensus around a particular rating (a lower deviation).
(*In practice, some albums can have several thousand ratings)
This album is rated in the top 2% of all albums on BestEverAlbums.com. This album has a Bayesian average rating of 78.9/100, a mean average of 77.8/100, and a trimmed mean (excluding outliers) of 79.1/100. The standard deviation for this album is 14.6.

A nothing album that feels so empty for the majority of the run time. This is mainly due to the ridiculous number of filler tracks present on here. I think you could cut 7 to 8 songs on here and they would not be missed at all. There are a couple of decent songs which are catchy and then you have one amazing track in That's Entertainment which saves this album from being bad. Every song sounds the same and by the end this repetition just gets so boring that it makes me want to just switch off the record. There doesn't seem to be much experimentation or uniqueness and I feel like I have heard several albums like this before so this just blends into the crowd. Overall, after the several listens I have given this record I have no desire to come back anymore and for some reason this album just doesn't resonate with me at all.

This album is mixed bag, there are ones of their best like Set The House Ablaze and That's Entertainment, but there are some filler ones as well.

Fantastic album. Their best, in my opinion.

One of three classic Jam albums, maybe not as immediate as All Mod Cons and Setting Sons but gets better and and better with repeated listens

The Jam mastered their sound on this album.

Not sure why I like this so much, but more than one song has stuck with me.

The last truly classic Jam album, sound affects in another tour de force from Weller and co. Full of great songs including, that's entertainment, set the house ablaze, and, pretty green. Start, is a good track but how on earth Weller didn't get sued for it's similarity to a Beatles song is simply unbelievable. A great album then, full of energy and melody, as you would expect from The Jam.

Your feedback for Sound Affects