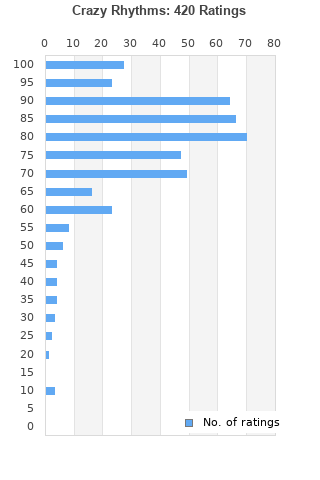 Crazy Rhythms is ranked as the best album by The Feelies. 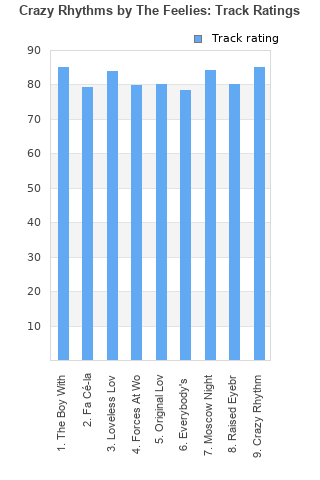 The Boy With The Perpetual Nervousness
Rating: 85 (84 votes)Comments:

Rating metrics: Outliers can be removed when calculating a mean average to dampen the effects of ratings outside the normal distribution. This figure is provided as the trimmed mean. A high standard deviation can be legitimate, but can sometimes indicate 'gaming' is occurring. Consider a simplified example* of an item receiving ratings of 100, 50, & 0. The mean average rating would be 50. However, ratings of 55, 50 & 45 could also result in the same average. The second average might be more trusted because there is more consensus around a particular rating (a lower deviation).
(*In practice, some albums can have several thousand ratings)
This album is rated in the top 2% of all albums on BestEverAlbums.com. This album has a Bayesian average rating of 78.9/100, a mean average of 78.0/100, and a trimmed mean (excluding outliers) of 79.1/100. The standard deviation for this album is 15.3.

For me this is average new wave, nothing outstanding apart from some guitar parts that are catchy.

This album did not raise my eyebrows, pretty much 80 guitar pop influenced by earlier generations, nothing unforgettable despite being some kind of influence. Not much is heard in the airwaves today.
Zillion in a dozen

Not a fan of this record, everything I hear I just feel I can get better quality performances on other records. Such as the guitar and vocal which do take a lot from albums that they are clearly inspired by. It can also feel quite dull and bland at times. Despite this, Raised Eyebrows is a fantastic song that really demonstrates brilliant instrumentation. There a few other songs that match this quality but unfortunately it doesn't happen for every song. Overall, the consistency is the big problem for me and the lack of a truly original sound that would make them stand out makes me struggle to rate this record highly.

They try a lot of stuff, but execute everything poorly and devoid of emotion. Don't like it at all how they butchered "Everybody's got Something to Hide" (in my opinion a hidden gem on the White Album) into a soulless, hyperactive performance. For the rest: equally hyperactive; Ian Curtis wannabe vocals; guitar solos that come across rather as a second riff; and just dull overall.

If it was 1980, I would look out for this band's future projects, because it does sound promising. It's just executed poorly.

Reminds me of the Modern Lovers. Pretty solid.

This is at the same time a very standard and daring album.
It's all about freaky direct sounds weirdly mixed generating not great songs but a curious album listening.

Anyone who describes one of the most exciting and hypnotic jams of the 80s (i.e. the title track) as "(a) song (that) combines a demonic quality to tight arrangements which oscillate between transcendence and ecstatic detached decadence" needs to get out more.

A New York indie album of its time through and through. It's all there; Television's spooling guitar lines, the nervous energy of the Talking Heads, The Lou Reed (and occasionally Iggy Pop) vocal inflections, and more than a hint of the 60s freak folk that kicked all this off.

Your feedback for Crazy Rhythms