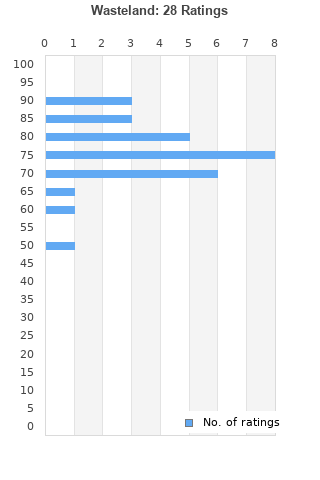 Wasteland is ranked 7th best out of 13 albums by Riverside on BestEverAlbums.com.

The best album by Riverside is Second Life Syndrome which is ranked number 3275 in the list of all-time albums with a total rank score of 454. 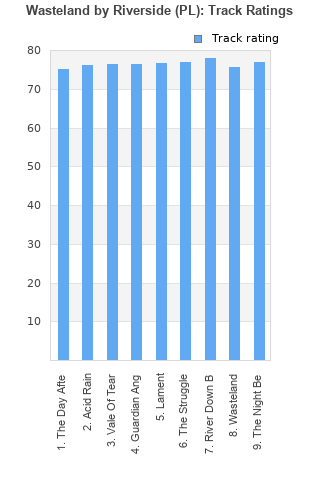 Rating metrics: Outliers can be removed when calculating a mean average to dampen the effects of ratings outside the normal distribution. This figure is provided as the trimmed mean. A high standard deviation can be legitimate, but can sometimes indicate 'gaming' is occurring. Consider a simplified example* of an item receiving ratings of 100, 50, & 0. The mean average rating would be 50. However, ratings of 55, 50 & 45 could also result in the same average. The second average might be more trusted because there is more consensus around a particular rating (a lower deviation).
(*In practice, some albums can have several thousand ratings)
This album is rated in the top 11% of all albums on BestEverAlbums.com. This album has a Bayesian average rating of 75.4/100, a mean average of 76.4/100, and a trimmed mean (excluding outliers) of 76.4/100. The standard deviation for this album is 9.9.

Yes, after their guitarist tragically died, Riverside somewhat return to their harder sound from their beginnings, with some great tracks like "Vale of Tears" and the ballad "River Down Below", while we find a weak instrumental compared to their standards in track 6 and others which sound fine but nothing special.
In short, in this new era I think they need to establish their sound and this can be a good transition album towards that.

The dark side of Riverside. Not comparing it to a certain album just saying it's darker and heavier then what I'm use to with this band and I love it. Probably their best since their first three albums.

Your feedback for Wasteland