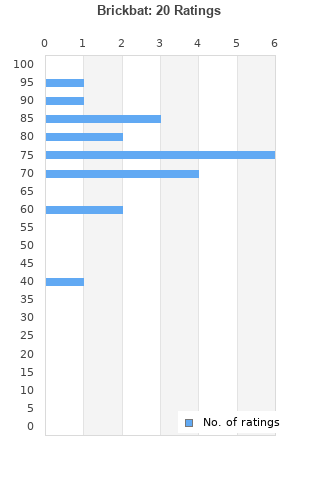 PIROSHKA - BRICKBAT HAND SIGNED RECORD AUTOGRAPHED NEW LUSH ELASTICA
Condition: New
Time left: 2d 18h 10m 58s
Ships to: Worldwide
£59.99
Go to store
Product prices and availability are accurate as of the date indicated and are subject to change. Any price and availability information displayed on the linked website at the time of purchase will apply to the purchase of this product.  See full search results on eBay 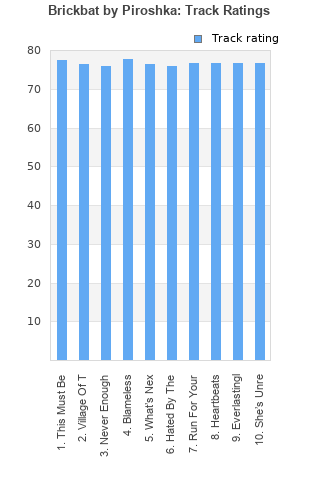 Rating metrics: Outliers can be removed when calculating a mean average to dampen the effects of ratings outside the normal distribution. This figure is provided as the trimmed mean. A high standard deviation can be legitimate, but can sometimes indicate 'gaming' is occurring. Consider a simplified example* of an item receiving ratings of 100, 50, & 0. The mean average rating would be 50. However, ratings of 55, 50 & 45 could also result in the same average. The second average might be more trusted because there is more consensus around a particular rating (a lower deviation).
(*In practice, some albums can have several thousand ratings)
This album has a mean average rating of 73.0/100. The trimmed mean (excluding outliers) is 72.5/100. The standard deviation for this album is 11.1.

Meltchett, Lush & Moose created the shoegaze generic sound that you bandied about. Childless? I presume you mean Childlike. Miki Berenyi is an old school punk in the mould of The Slits, The Raincoats etc etc. “Lots of girls’ history of music is playground songs; chants, folk songs and nursery rhymes, passed down through mothers, aunts, older sisters and friends. I want to incorporate these rhymes into our songs, they are all I have in terms of a musical background and I intend to use them, however small and insignificant they are to other people. This is one of the ways we can build an identity for ourselves –we’re starting from zero, no rules, no role models.” Viv Albertine, The Slits.

1994, of all the times to conjure up, when UK indie looked like it was going to kick seven bells out of the mainstream, when it felt like anything was possible, Piroshka have 1994 written through them like a stick of Brighton Rock.
That’s not to say this Shoegaze/Brit-pop supergroup is some lazy retread of the past because it’s anything but (2019 life has a way of infiltrating these songs), it’s more of a case of being middle-aged but still feeling like a twenty-something. And then there’s the songs which in any sane world should be blasted from any self-respecting indie-kid’s stereo. And I haven’t even mentioned it features Miki from Lush. Seriously.

Your feedback for Brickbat