A Woofer In Tweeter's Clothing (album) by Sparks 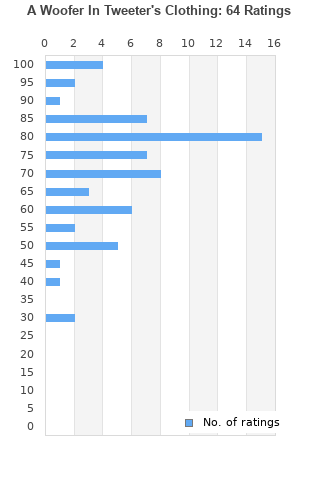 Sparks ‎– A Woofer In Tweeter's Clothing 1973 Bearsville ‎BR2110 Jacket/Vinyl NM
Condition: Used
Time left: 2d 21h 26m 57s
Ships to: Worldwide
$45.00
Go to store
Product prices and availability are accurate as of the date indicated and are subject to change. Any price and availability information displayed on the linked website at the time of purchase will apply to the purchase of this product.  See full search results on eBay

A Woofer In Tweeter's Clothing is ranked 4th best out of 34 albums by Sparks on BestEverAlbums.com.

The best album by Sparks is Kimono My House which is ranked number 1096 in the list of all-time albums with a total rank score of 1,637. 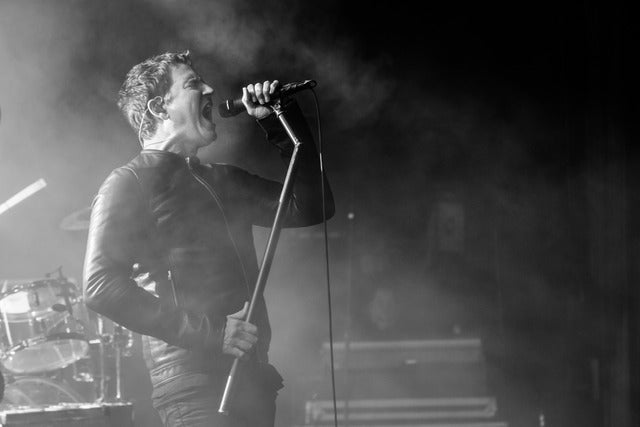 Listen to A Woofer In Tweeter's Clothing on YouTube 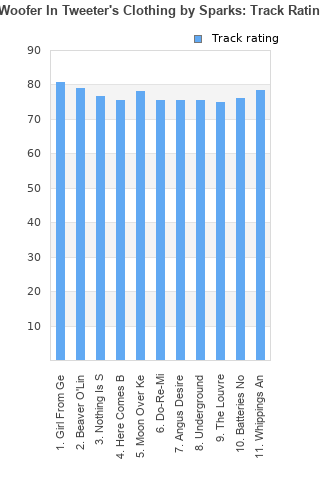 A Woofer In Tweeter's Clothing rankings

A Woofer In Tweeter's Clothing collection

A Woofer In Tweeter's Clothing ratings

Rating metrics: Outliers can be removed when calculating a mean average to dampen the effects of ratings outside the normal distribution. This figure is provided as the trimmed mean. A high standard deviation can be legitimate, but can sometimes indicate 'gaming' is occurring. Consider a simplified example* of an item receiving ratings of 100, 50, & 0. The mean average rating would be 50. However, ratings of 55, 50 & 45 could also result in the same average. The second average might be more trusted because there is more consensus around a particular rating (a lower deviation).
(*In practice, some albums can have several thousand ratings)
This album has a mean average rating of 73.0/100. The trimmed mean (excluding outliers) is 73.2/100. The standard deviation for this album is 16.8.

A Woofer In Tweeter's Clothing favourites

A Woofer In Tweeter's Clothing comments

You know what I like? When the personality of a music artist shines as a bright as their music. Larger than life characters who write music and tackle subjects that you would have never guessed someone would have taken on. I'm still searching for these artists. No matter how many I have in my collection any more would be great. Sparks are one of these gems of mine. A diamond on the production line of this great lead mine we call stardom. This album... was released before they became famous. And where the Sparks were zany up the ceiling in their heyday... things are much stranger here. Like Goldilocks eaten by 3 bears for her protection strange. 5 members no less here. 'Girl From Germany', 'Underground' and 'Whippings and Apologies' are churned out like The Troggs in a dark room with Happy the Helium Clown. Sparks prove they are off their cake in 'Beaver O'Lindey' with Russell doing his best home from work furry animal impression... WITH MAKEUP! And damn! It is good! The guitars out here as much as they are on Sparks later release 'Big Beat' while keyboards take back seat. The aliens coming to get the local folk is explored in the somber 'Moon Over Kentucky' while happy gibberish is the order of the day for 'Do-Re-Mi' cover. Ron's writing is still in developing stages here but he pulls out the puppets to great surprise while Russell's hop scotch high as the skies own aims vocals are appearing on 'Here Comes Bob' among others. Hear the start of that track? That is a little care to the rules this band is giving. This is a rock album and were sprinkling those old as old violins on it. Enjoy it. Get the lot and take it all. This fun put to music.

The number one album in heaven. It even has a cover of Do-Re-Mi from The Sound of Music.

Your feedback for A Woofer In Tweeter's Clothing