The Mantle (studio album) by Agalloch 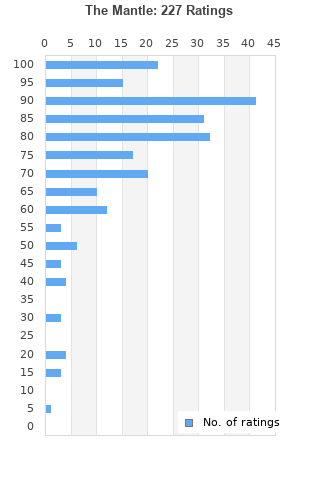 The Mantle is ranked as the best album by Agalloch. 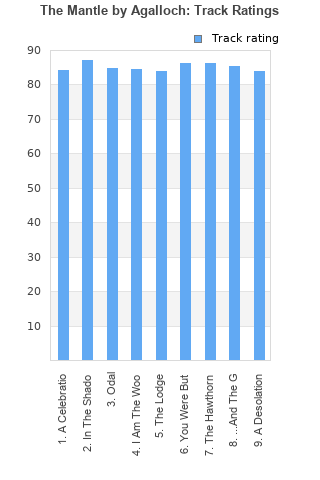 #
Track
Rating/Comments
1.
A Celebration For The Death Of Man
Rating: 84 (49 votes)Comments:

In The Shadow Of Our Pale Companion
Rating: 87 (56 votes)Comments:

Rating metrics: Outliers can be removed when calculating a mean average to dampen the effects of ratings outside the normal distribution. This figure is provided as the trimmed mean. A high standard deviation can be legitimate, but can sometimes indicate 'gaming' is occurring. Consider a simplified example* of an item receiving ratings of 100, 50, & 0. The mean average rating would be 50. However, ratings of 55, 50 & 45 could also result in the same average. The second average might be more trusted because there is more consensus around a particular rating (a lower deviation).
(*In practice, some albums can have several thousand ratings)
This album is rated in the top 2% of all albums on BestEverAlbums.com. This album has a Bayesian average rating of 79.4/100, a mean average of 77.4/100, and a trimmed mean (excluding outliers) of 79.7/100. The standard deviation for this album is 18.9.

Ahhh, just how I like my metal, watered down and boring. How did they manage to take the worst parts of doom metal, black metal, and folk metal and put it into a nice compact little package? Oh wait, they didn't. Because this thing is a painstaking 68 minutes. Every song is just absolutely interminable, even from the very first song, which is only 2.5 minutes. It could have easily been 30 seconds or less and the point would have gotten across. And did I forget to mention the awful vocals? The singer sounds like he's been sucking helium so much his voice is just permanently higher and his growls sound more like whimpers. How has this managed to impress people for nearly 20 years???

The silly growly vocals really lets this album down. Otherwise, it's good.

First real metal album I've listened to. Has a dark and gritty atmosphere and some pretty good instrumentation.

nice instrumentation and clean production and some beautiful melodies throughout. it's just it feels like something is missing and at the end of record i can't remember any particular moment that i want to listen to it again.

The Mantle is a companion to cold, desolate walks through a north american forest during the harsh but quiet winter. It's no surprise the album takes inspiration from cynical european black metal, desolate dark ambient, and chilling neofolk. The Mantle molds all of this into a masterful one-piece package and it pulls no punches.

I wouldn't call it life-changing, and it kind of drags at times, especially in the middle. Still, it's one of the most beautiful things Ive heard recently, and it's an extreme metal album that has a lot of completely non-typical metal ideas

Odal is beautiful. I learned it on guitar yesterday, now I feel like a king.

It's not every day you make a discovery like this. Utterly perfect. Elegant. Cold and somber. Warm and inviting. Beautiful.

Amazing. I had never been a fan of growling vocals, but this album has changed that. It's a brilliant masterpiece.

Your feedback for The Mantle