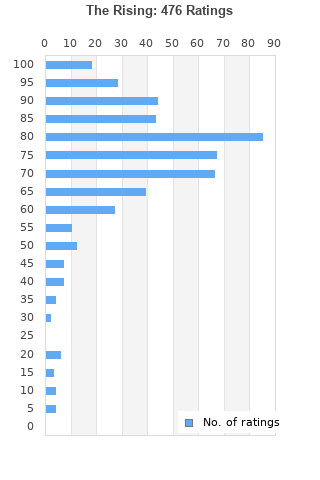 The Rising is ranked 7th best out of 138 albums by Bruce Springsteen on BestEverAlbums.com.

The best album by Bruce Springsteen is Born To Run which is ranked number 69 in the list of all-time albums with a total rank score of 19,410. 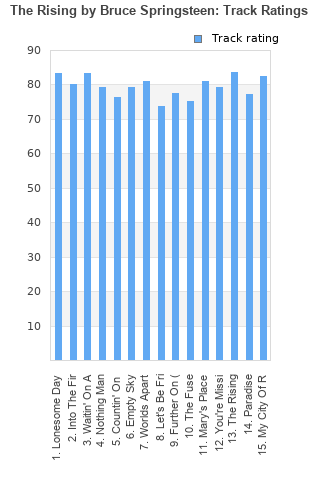 Rating metrics: Outliers can be removed when calculating a mean average to dampen the effects of ratings outside the normal distribution. This figure is provided as the trimmed mean. A high standard deviation can be legitimate, but can sometimes indicate 'gaming' is occurring. Consider a simplified example* of an item receiving ratings of 100, 50, & 0. The mean average rating would be 50. However, ratings of 55, 50 & 45 could also result in the same average. The second average might be more trusted because there is more consensus around a particular rating (a lower deviation).
(*In practice, some albums can have several thousand ratings)
This album is rated in the top 16% of all albums on BestEverAlbums.com. This album has a Bayesian average rating of 74.8/100, a mean average of 73.4/100, and a trimmed mean (excluding outliers) of 74.9/100. The standard deviation for this album is 17.9.

Where Springsteen found his stride again

All the hip production in the world could not cover up the most ordinary half-baked set of songs Springsteen had released up to this point.
Whatever was actually "rising," it sure wasn't his listeners' expectations.

Thankfully, Springsteen redeemed himself later in the 2000s with the excellent Magic and Working on a Dream albums.

Condensed into a 7" Single:
Side A: Mary's Place
Side B: You're Missing

A long, but staying safe in the usual Boss song vein. No big surprises either. Solid stuff

Great iconic album, even 40 years after his first album he still makes great and relevant music in 2002, amazing.

I'm a Springsteen fan. His 70s and 80s output is some of the best music ever made. Still I'm not totally sure I like this record. There's just something about it that isnt clicking. For one thing, its way too long. There is at least 5 songs that coudlve(shouldve) been cut. I would do away with Into the Fire, Countin on a Miracle, Empty Sky, The Fuse, and Further on Up the Road. None of those songs are bad, I just dont really see them as living up to the Boss's very high standard. Even with those cuts, I would still rank this below any of his classic albums. I understand the significance of the album in 2002 post 9/11, I just dont believe it has transcended that. All that being said, there are some amazing moments. Lonesome Day is as good a Springsteen as any. Nothingman is a totally epic slow-burner. Lets Be Friends and Mary's Place are both good fun, not exactly groundbreaking though. The closer, My City of Ruins, is a fine song (except for the cringe-worthy chorus). Overall, fine for a Springsteen fan but I dont expect this record will win over any holdouts

Not a bad album at all, but Springsteen has never been my kind of artist, I was only really attracted to this album by the concept.

The album itself is a little bit too long and for someone who isn't his biggest fan, boring. I will say that 'Your Missing' is very good and 'Mary's Place' is easily one of my favourite songs (it was the biggest surprise of the album, genuinely amazing), other than that, it's ok.

If I have one criticism - it is that it is very long (15 tracks) but I have no idea how he could have made it shorter as I would not want to remove/omit any of the songs ??

I think this is Bruce's second or third best album. Some really great songs on here: The Rising, The Fuse (the sound is not very Bruce-like, but the lyrics are very much so), Nothing Man, Radio Nowhere, Waitin' on a Sunny Day, My City of Ruins. For me, this album is Bruce's best in years, and right up there after Born to Run.

Bruce gets his groove back here. The start of a career renaissance. Almost no one has such a strong second act. Because rock died on popular radio, you can't judge post 90's rock albums by hits. Yes most of his big hits were pre 1990. But a lot of songs recorded starting here and through today rank with his finest. I don't believe Empty Sky gets the love it should. The 9/11 inspired lyrics are crushing here.
"I woke up this morning
I could barely breathe
Just an empty impression
In the bed where you used to be"

Great comeback album by The Boss, some of his strongest material in years. Perhaps a bit too long but still has a couple of gems. Truly an inspiring records given the time it was released. A beacon of hope during the dark times.

Your feedback for The Rising