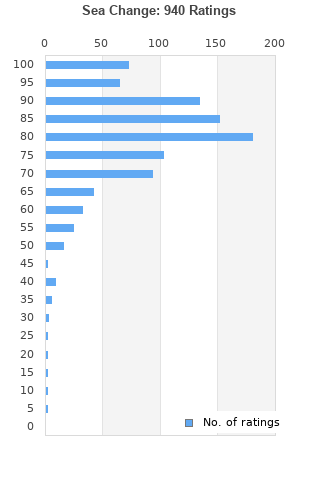 Sea Change is ranked 2nd best out of 18 albums by Beck on BestEverAlbums.com.

The best album by Beck is Odelay which is ranked number 248 in the list of all-time albums with a total rank score of 7,622. 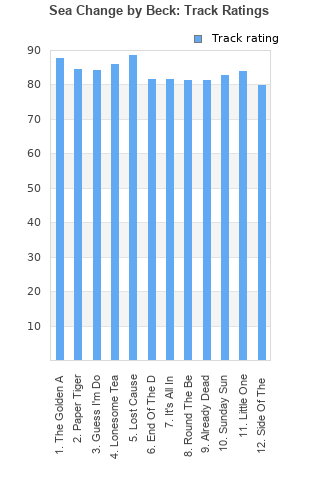 Rating metrics: Outliers can be removed when calculating a mean average to dampen the effects of ratings outside the normal distribution. This figure is provided as the trimmed mean. A high standard deviation can be legitimate, but can sometimes indicate 'gaming' is occurring. Consider a simplified example* of an item receiving ratings of 100, 50, & 0. The mean average rating would be 50. However, ratings of 55, 50 & 45 could also result in the same average. The second average might be more trusted because there is more consensus around a particular rating (a lower deviation).
(*In practice, some albums can have several thousand ratings)
This album is rated in the top 2% of all albums on BestEverAlbums.com. This album has a Bayesian average rating of 80.2/100, a mean average of 79.1/100, and a trimmed mean (excluding outliers) of 80.2/100. The standard deviation for this album is 14.6.

"Sea Change" is just the third Beck album I have come across, and among these three, it is by far the most melodic and most easily accessible. The other two are "Mellow Gold" and "Odelay" and on those two I was challenged on several tracks.

"Sea Change" is a rather subdued album with a strong roots point in both country and folk-music. Along the way I came to think of Nick Drake several times; and also artists Alex Chilton and Kurt Cobain might sources of inspiration for Beck, on tracks like "Side of the Road" and "Little One".

My great favorite song is "Lost Cause". A very melodic and quite catchy song, with evocative background sounds. The track was one of two singles pulled from the album and it did well both in the U.S. and in the U.K. ‘

The second single was "Guess I'm Doing Fine", which is a slightly melancholy and country-influenced song. A nice but also less remarkable song than "Lost Cause".

Among other songs that are worth highlighting is "Already Dead", which is so catchy that you might think you have heard the song before. Lovely acoustic guitar and one of the songs that reminds me of Nick Drake.

"End of the Day" is also very nice - melodic with a nice some quirky theme.

"Little One" was a track that reminded me a bit of Kurt Cobain's more subdued tracks from "Nevermind" and "In Utero".

"Sea Change" has to a great extent changed my impression of Beck as an artist, and he now appears to me far more nuanced than before my meeting with this great album.

It's really good for what it is but man I still can't love it as much as most people and two friends seem to. I much prefer fun upbeat Beck over slow sad Beck.. Fun Beck is what makes him Beck.

Love this record. I love the intimacy, the production, everything. It reminds me of On the Beach or Tonight's the Night era Neil Young at times, but with the godly Nigel Godrich producing. It's beautiful.

Rolling Stones-ish whiny music I love so much from the Stones, but without the same sense of humor it becomes self-pitying, instead of world-weary. Glad he stopped with the childishly aggressive synth sounds though (which were only any listenable when the Dust Brothers led them in the right direction); I think he's closer to himself now, but I've never thought of him as a good songwriter either. Just a bad musician overall, so the fact that he isn't so pretentious anymore doesn't make a huge improvement as it would with other artists. You can downvote my comment now.

One of the best acoustic albums of all time. It's hard to put yourself in the mindset of the Beck fan in the late 90s/early OOs with all of the pivots he can do with his sound- and still excel at them. Here, he cultivates a brittle, delicate sound of heartbreak and somberness along with some soothing, yet interesting, guitar licks. The lyrics aren't very intricate, but they don't need to be. This is a sad album and he wants to evoke the mood rather than the complexities. It may be one or two songs too long, but still great!

Beck shows his most vulnerable side in this collection of post-breakup acoustic tracks. You can tell the malaise, yet the disappointment in his voice as he evokes so much emotion in every song. His voice sounds like Eddie Vedder, and I'm unsure of if he actually sings in that baritone range, but he does a great job. The guitar-work doesn't have to be at the forefront, but I think I was just hoping for more of a significant melody from the instrument through these songs. Still a great album though!

No doubt about it, this is some of Beck's finest work. Somehow, he's able to eloquently put into words what heartbreak essentially feels like.

All the songs here are beautiful. I would love more Beck songs like these!

There is no doubt this is a great album. IMO, probably two tracks too long though.

Your feedback for Sea Change