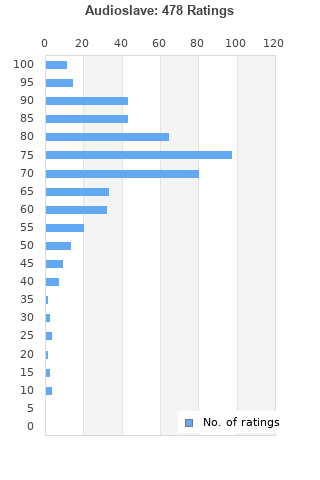 Audioslave is ranked as the best album by Audioslave. 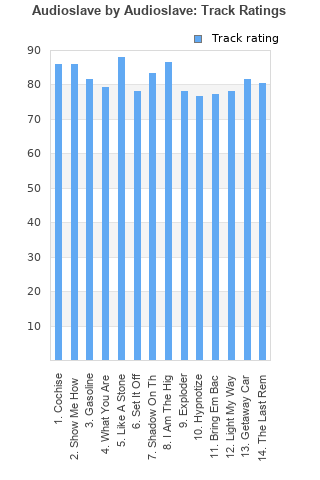 Rating metrics: Outliers can be removed when calculating a mean average to dampen the effects of ratings outside the normal distribution. This figure is provided as the trimmed mean. A high standard deviation can be legitimate, but can sometimes indicate 'gaming' is occurring. Consider a simplified example* of an item receiving ratings of 100, 50, & 0. The mean average rating would be 50. However, ratings of 55, 50 & 45 could also result in the same average. The second average might be more trusted because there is more consensus around a particular rating (a lower deviation).
(*In practice, some albums can have several thousand ratings)
This album has a Bayesian average rating of 73.7/100, a mean average of 72.6/100, and a trimmed mean (excluding outliers) of 73.7/100. The standard deviation for this album is 15.0.

There's a handful of really good songs on this. However, the album as a whole is nothing to get excited about. Mainly pedestrian commercial sounding rock. Above average.

What happened to Chris Cornell's voice after his first solo album? This voice ruins an already underwhelming album.

A great mix of hard rock songs (Cochise, Light My Way, Show Me How To Live) and rock ballads (Like A Stone, I Am The Highway, Getaway Car). The RATM band and Chris Cornell's phenomenal voice work brilliantly together. The first half is much better than the second. My highlights are Show Me How To Live, Like A Stone and Gasoline. Weak tracks are Shadow on the Sun, Exploder and The Last Remaining Light.

Excellent collection of songs. Chris Cornell's voice is superb on this release! Rating (87.50)

My thoughts while listening to this album:

I love the grunge influence brought to the new era.
Tom Morello does his thing. He wants to jam no matter who the singer is. One thing consistent in this album: it rocks.

After the first half, once you get past the singles, you get scared, entering new territory. My expectations of the second half of the album were below actual performance. Actually, I zoned out, not regretting a minute of any song. I thought, "oh boy, here we go, here comes the filler". But I couldn't hear any. Could you? To be honest, this whole album contains a consistent feel to it. One of deep introspection. With deep lyrical themes. This album is much deserving of the 802 spot! Much deserved.

One of the very best Rock Albums of the 2000s. the First half is one of the most explosive and interesting First halves in 21st century rock.

Fav Tracks- Cochise, I Am The Highway,Shadow Of The Sun,What You Are.

I dunno why this album doesn't have a higher average rating. It's great not a bad song on it. Does get weaker after track 8 and it's a bit too long though.

Favourite tracks: Cochise, Like A Stone, I Am The Highway

Your feedback for Audioslave