A Rush Of Blood To The Head (studio album) by Coldplay 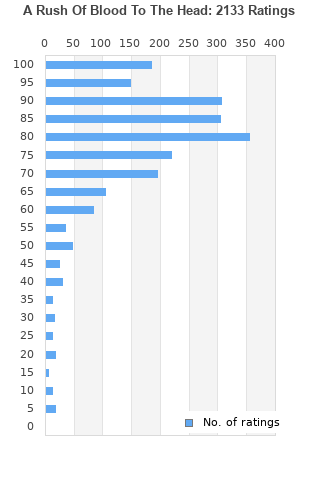 A Rush of Blood to the Head by Coldplay (CD, Aug-2002, Capitol)
Condition: Very Good
Time left: 1h 43m 12s
Ships to: Worldwide
$9.99
Go to store
Product prices and availability are accurate as of the date indicated and are subject to change. Any price and availability information displayed on the linked website at the time of purchase will apply to the purchase of this product.  See full search results on eBay

A Rush Of Blood To The Head is ranked as the best album by Coldplay.

Tickets from Ticketmaster Get tickets
May
24
Mon
20:00

Listen to A Rush Of Blood To The Head on YouTube

A Rush Of Blood To The Head track list 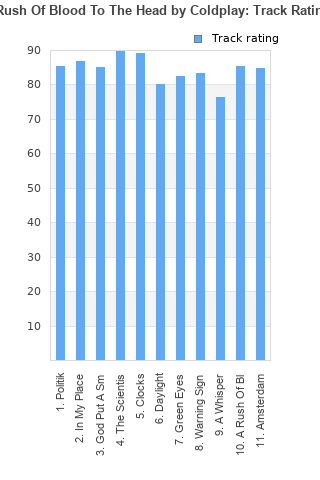 A Rush Of Blood To The Head rankings

A Rush Of Blood To The Head collection

A Rush Of Blood To The Head ratings

Rating metrics: Outliers can be removed when calculating a mean average to dampen the effects of ratings outside the normal distribution. This figure is provided as the trimmed mean. A high standard deviation can be legitimate, but can sometimes indicate 'gaming' is occurring. Consider a simplified example* of an item receiving ratings of 100, 50, & 0. The mean average rating would be 50. However, ratings of 55, 50 & 45 could also result in the same average. The second average might be more trusted because there is more consensus around a particular rating (a lower deviation).
(*In practice, some albums can have several thousand ratings)
This album is rated in the top 2% of all albums on BestEverAlbums.com. This album has a Bayesian average rating of 78.9/100, a mean average of 77.4/100, and a trimmed mean (excluding outliers) of 79.0/100. The standard deviation for this album is 18.0.

A Rush Of Blood To The Head favourites

A Rush Of Blood To The Head comments

One of my favorite albums of all time. Probably top 15, maybe 10 ever.

The first half of this album is so, so good. Definitely tails off.

First 5 tracks are excellent, then it drops a bit (or maybe it doesn't, but it feels that way because it is sounds more or less the same, no surprises). The self-titled track is an exception and one of their best songs.

A voting oddity, 89th in the greatest album list but less than 1500th in the ratings! Therefore people don't rate it that highly but often put it in their top 100. This would seem to be a case of not heard enough albums!

Classic rock is far and away my favorite genre. And yet, this is one of my favorite albums of all time. Something about just keeps me coming back.

To all you guys thinking this album is a 10, it's really not. You can enjoy whatever you like, but there is no need to mark down any comments by people that have given the album a below average score as 'unhelpful', just because you think it deserves better.
Coming from someone who's listened to this album many times during my teenage years, looking back the songs are just boring. They aren't bad, it's just that nothing really jumps out anymore. Even though they feel nostalgic, after a few songs it quickly degrades into sheer nothingness.
In 5 years, please, look back at this album. I highly doubt any of you will still hold it as high as you do now.

Your feedback for A Rush Of Blood To The Head