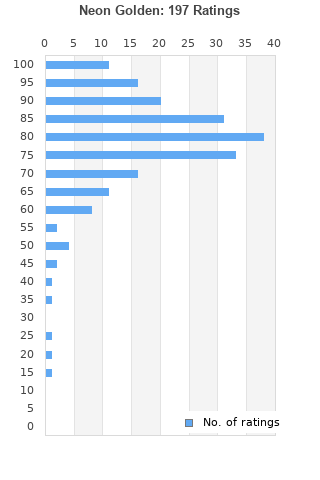 The Notwist-Notwist (The) - Neon Golden CD NEW
Condition: Brand New
Time left: 1d 6h 43m 17s
Ships to: Worldwide
$21.39
Go to store
Product prices and availability are accurate as of the date indicated and are subject to change. Any price and availability information displayed on the linked website at the time of purchase will apply to the purchase of this product.  See full search results on eBay

Neon Golden is ranked as the best album by The Notwist. 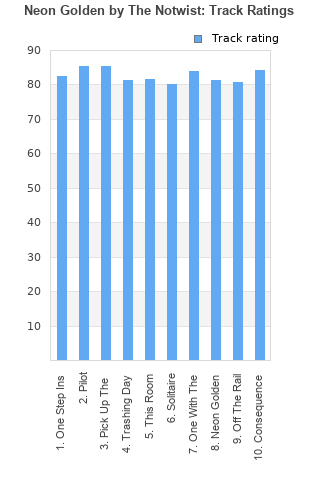 Rating metrics: Outliers can be removed when calculating a mean average to dampen the effects of ratings outside the normal distribution. This figure is provided as the trimmed mean. A high standard deviation can be legitimate, but can sometimes indicate 'gaming' is occurring. Consider a simplified example* of an item receiving ratings of 100, 50, & 0. The mean average rating would be 50. However, ratings of 55, 50 & 45 could also result in the same average. The second average might be more trusted because there is more consensus around a particular rating (a lower deviation).
(*In practice, some albums can have several thousand ratings)
This album is rated in the top 2% of all albums on BestEverAlbums.com. This album has a Bayesian average rating of 78.9/100, a mean average of 78.0/100, and a trimmed mean (excluding outliers) of 79.2/100. The standard deviation for this album is 14.3.

Electronic with some hints of jazz and rock and of course it had inherited at bit from the Krautrock genre so many years ago? Their vintage crackled sounds are still there and so is the music which was also featured on the previous album Shrink. And relistening to this album just makes me realise how good they are also on this album.

Sadly not available on major streaming services which is a pity because an album this good deserves a wider audience. However it’s widely available on CD relatively cheaply or YouTube

An album that is most comparable to Give Up by The Postal Service, although I think that this has more potential to be a better album, with more complex sounds throughout the album.

Favorite Track: Pick Up the Phone

Fantastic record through and through. The sampling is flawless, and the rhythms are interesting and unique enough in each track to keep you listening. One of my favorites. Not sure why the rating is so low... The album has a 79/100 even though the lowest rated song is an 82...

Great album. Pilot and Pick Up The Phone are fantastic as is the closing track Consequence

You know how you think you have gone into a room and forgot something? This album comes full circle when you think about it.

Your feedback for Neon Golden