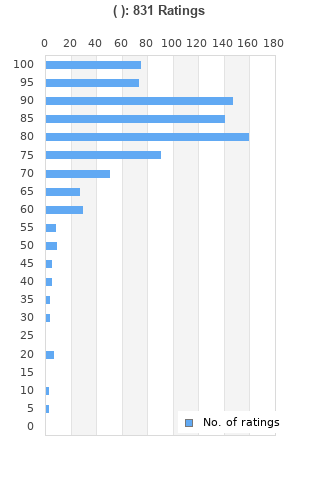 ( ) is ranked 3rd best out of 20 albums by Sigur Rós on BestEverAlbums.com.

The best album by Sigur Rós is Ágætis Byrjun which is ranked number 67 in the list of all-time albums with a total rank score of 20,077.

Tramps Like Us
The Vogel at Count Basie Center for, Red Bank, United States. 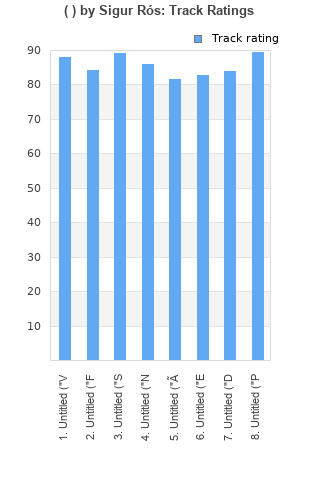 Rating metrics: Outliers can be removed when calculating a mean average to dampen the effects of ratings outside the normal distribution. This figure is provided as the trimmed mean. A high standard deviation can be legitimate, but can sometimes indicate 'gaming' is occurring. Consider a simplified example* of an item receiving ratings of 100, 50, & 0. The mean average rating would be 50. However, ratings of 55, 50 & 45 could also result in the same average. The second average might be more trusted because there is more consensus around a particular rating (a lower deviation).
(*In practice, some albums can have several thousand ratings)
This album is rated in the top 1% of all albums on BestEverAlbums.com. This album has a Bayesian average rating of 82.2/100, a mean average of 81.1/100, and a trimmed mean (excluding outliers) of 82.3/100. The standard deviation for this album is 14.5.

The album starts off very strongly with tracks 1,3 and 4 but it trails off nearer the end of the record. Those 3 tracks I mentioned are all beautiful compositions that rivals the quality of any of their releases. The string section and the drumming are personal favourites of mine. They have complete control over the tempo of the music and give the instrumentation that special edge that makes these tracks more enjoyable. There is quite a big gap after those songs until you get to the closing track which ends the album in style and really saves the second half. The rest of the cuts aren't bad but they are quite close to filler and none of them really draw me in. The record is very bloated as well and does not warrant the run time it has. Overall, some great peaks on this album but the other content lets it down and keeps it from being up there with their other releases.

It's for a golden-hour summer in the woods, a dark wintery night on a mountain, the first fall of leaves in the autumn and when the snow melts in the spring. It's for every moment, big or small, happy or sad, lonely or comforted. A masterpiece.

If you’re ever feeling a bit on edge, irritated, or like you’re about to lash out at someone you love, just pop this album on and let go.

I’m lying on a gently moving cloud, but it’s warm and snug and I am floating over ice-melts in an Icelandic summer burst of lushness. This is just about the most perfect eyes-closed album. It only rates as a 90 because I can never easily tell anyone what the album is called.

I remember the first time I watched a Sigur Ros video. I remember an apocalyptical kindergarten, where kids acted like kids running around ashes and snow from the nuclear winter. There we have the tension of the whole album: a celebration of innocence and life even in the most unrelenting spaces. In the Ambiental sounds that create darkness, Jonsi's voice grows.

Got into this Icelandic band in 2018 and enjoy their ambient electronic sound. Who cares if you cant understand the words - often he isn't even using Icelandic words - it's more about the feel. This isn't a dire album unless you want to feel dire - place your own emotions onto the soundscape.

Everything on this album sounds the same, and I can't tell if that's a good thing or a bad thing.

Very soothing and enjoyable album. My only concern is that it seems to go on for just a bit too long.

The most brooding Sigur Ros piece I have found so far. It seems slower, heavier, and more spacious than "Aegetis Byrjum" (or however its spelled), and all that along with being darker compared to "Takk...", my personal favorite.