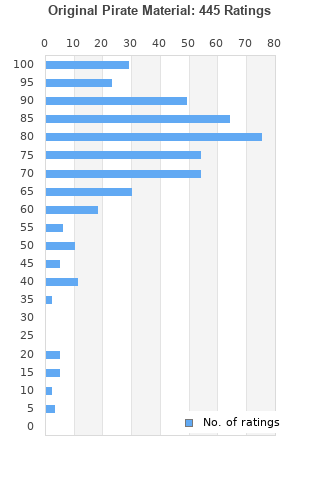 Original Pirate Material is ranked as the best album by The Streets. 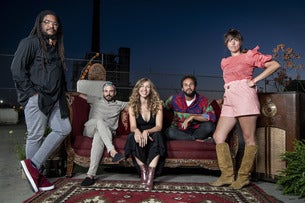 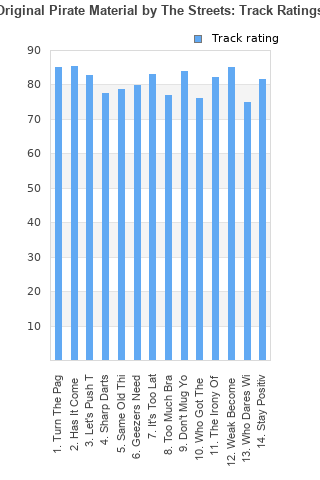 Rating metrics: Outliers can be removed when calculating a mean average to dampen the effects of ratings outside the normal distribution. This figure is provided as the trimmed mean. A high standard deviation can be legitimate, but can sometimes indicate 'gaming' is occurring. Consider a simplified example* of an item receiving ratings of 100, 50, & 0. The mean average rating would be 50. However, ratings of 55, 50 & 45 could also result in the same average. The second average might be more trusted because there is more consensus around a particular rating (a lower deviation).
(*In practice, some albums can have several thousand ratings)
This album is rated in the top 4% of all albums on BestEverAlbums.com. This album has a Bayesian average rating of 77.6/100, a mean average of 75.5/100, and a trimmed mean (excluding outliers) of 77.7/100. The standard deviation for this album is 17.9.

I rarely - if ever - listen to either this or A Grand Don't Come for Free these days - and when I do, they admittedly don't sound as good as they did back then - but I will always have a special place for them, I don't even dare to calculate how many times I listened to them starting from 2004/2005 and for more or less the next decade. This one might not have the central narrative that ties their sophomore album together, but when it comes to production this is on a completely different level, pretty much every track is addictive. His rapping barely qualifies as such, it resembles more spoken word than anything else - with his accent being the icing on the cake - but it somehow works into perfection in this specific environment.
To sum it up, hands down my favorite The Streets album.

I've definitley heard better... BUT still very interesting. Anyone with enough patience for something different should check this out. Over rated by critics in my opinion but not complete trash either.

A great album with a very interesting sound! I can definitely see why people might be turned off by the way Mike Skinner raps, as it almost feels like spoken word. I'll admit, I was a bit iffy about the album at first, but after a little while I came to appreciate it. I do still think that the album has a few weak points here and there, but as a debut album, the quality on this thing is pretty impressive - especially after reading about the DIY nature of its production. The dude recorded his vocals in a wardrobe! On the lyrical side of things, I appreciate how he describes ordinary life in a way that isn't too flashy. As a result, this album feels like a glimpse into what regular life was like in central England during the early 2000s. Some of my favorites off of this include "Has It Come to This?," "It's Too Late," "Don't Mug Yourself," and "Weak Become Heroes." So if you're looking for something a little different that gives you a look into someone else's lifestyle and experiences, you should definitely check out this album.

I need to listen to this again like soon. I remember before I heard it having preconceptions that it was probably not going to live up to the hype and be some fad crap. As soon as the first lines on the first track kick in you know it's going to be great. A fantastic opening track sets up the whole thing.

Kingy - don't be a moron. The Streets (while decent) isn't the epitome of modern music, and many of those who criticize this aren't fogey dadrockers. I can't wait to see your chart.

You can learn quite a bit from this album.

Your feedback for Original Pirate Material