By The Way (studio album) by Red Hot Chili Peppers 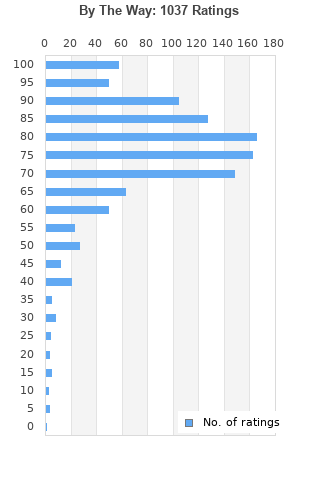 By The Way is ranked 3rd best out of 23 albums by Red Hot Chili Peppers on BestEverAlbums.com.

The best album by Red Hot Chili Peppers is Blood Sugar Sex Magik which is ranked number 176 in the list of all-time albums with a total rank score of 9,948. 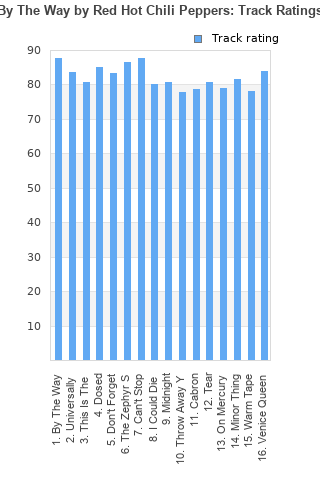 By The Way rankings

By The Way collection

By The Way ratings

Rating metrics: Outliers can be removed when calculating a mean average to dampen the effects of ratings outside the normal distribution. This figure is provided as the trimmed mean. A high standard deviation can be legitimate, but can sometimes indicate 'gaming' is occurring. Consider a simplified example* of an item receiving ratings of 100, 50, & 0. The mean average rating would be 50. However, ratings of 55, 50 & 45 could also result in the same average. The second average might be more trusted because there is more consensus around a particular rating (a lower deviation).
(*In practice, some albums can have several thousand ratings)
This album is rated in the top 7% of all albums on BestEverAlbums.com. This album has a Bayesian average rating of 76.2/100, a mean average of 75.1/100, and a trimmed mean (excluding outliers) of 76.2/100. The standard deviation for this album is 16.2.

By The Way favourites

By The Way comments

Some of the most beautiful and delicate music the Chili Peppers have made is on this album.

First half much stronger than the second half. But so many good tracks. My second favourite Chilis album. The singles are great, but my favourites are Universally Speaking, Dosed and Venice Queen. Weakest tracks are Tear, On Mercury, Warm Tape.

A record I really wasn't looking forward to listening to again but it really surprised me and has grown on me a lot. The songs are all a lot of fun and all are experimental and kept me entertained even when the run time was dragging a bit. Furthermore, the album has some of the groups best big songs on it but also has some of their best deep cuts and is definitely worth listening to just to find those. The guitar work is the true star of the show though with some of the best instrumentation the band has released. However, the album is easily criticised by its elongated run time and large amount of filler songs. Also, the tempo seems a bit off on some tracks with them feeling a bit slow. Overall, an album I will look forward to coming back to as it is very enjoyable and has a lot of memorable moments to draw me back in.

The greatest album RHCP has ever released and an excellent and underrated masterpiece of an album.

I just love how mellow and experimental it is and it is definitely way better than Californication and Blood Sugar Sex Magik.

Some good songs. They could of cut about 6 songs off this album to make it much better. Way to long. Way to much filler

Probably the most consistent album Red Hot Chili Peppers has released. Some great tracks (By the Way, Can't Stop) and some that seem to barely have the will to exist (Dosed, Warm Tape). Still, By the Way is enjoyable enough for multiple listens.

A pleasant and well made album, but too many songs are mellow and similar for it to ever be considered a great album. The big singles are still the best songs unfortunately. It's totally fine for an artist to experiment, but in the case of TRHCP, the experiments don't quite work like it did on their other 90's and 2000's albums. I don't understand why this band always felt the need to stuff a bunch of extra mediocre songs in their albums to appear long and epic.....because of the time between recording albums so they wanted to satisfy their fans? Well a better way to satisfy your fans is to have 10 incredible songs instead of 3 classics and 13 filler songs.

Whys is this album so underrated? almost all songs are very good
from start to finish

Favorites: By The Way, Can't Stop

Your feedback for By The Way