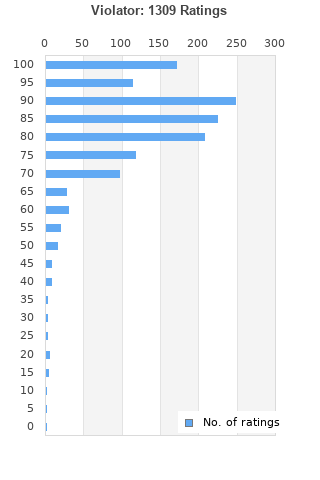 Depeche Mode: Violator -11904 Cassette Tape
Condition: Very Good
Time left: 1h 52m 22s
Ships to: Worldwide
$22.00
Go to store
Product prices and availability are accurate as of the date indicated and are subject to change. Any price and availability information displayed on the linked website at the time of purchase will apply to the purchase of this product.  See full search results on eBay

Violator is ranked as the best album by Depeche Mode. 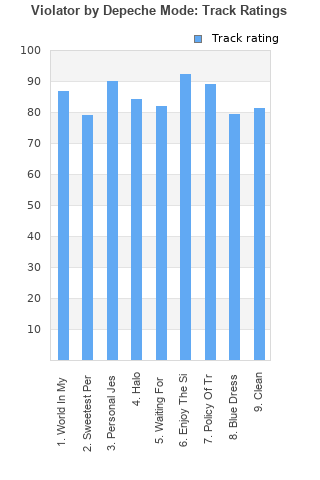 Rating metrics: Outliers can be removed when calculating a mean average to dampen the effects of ratings outside the normal distribution. This figure is provided as the trimmed mean. A high standard deviation can be legitimate, but can sometimes indicate 'gaming' is occurring. Consider a simplified example* of an item receiving ratings of 100, 50, & 0. The mean average rating would be 50. However, ratings of 55, 50 & 45 could also result in the same average. The second average might be more trusted because there is more consensus around a particular rating (a lower deviation).
(*In practice, some albums can have several thousand ratings)
This album is rated in the top 1% of all albums on BestEverAlbums.com. This album has a mean average rating of 82.0/100. The trimmed mean (excluding outliers) is 83.4/100. The standard deviation for this album is 14.7.

It's a great album. The best part for me is "halo".

Never paid much attention to DM for many years due to their early singles. Once I heard Personal Jesus I made a point of listening to the album thinking the singles - part wrong. Yes, the singles (Personal Jesus, Enjoy The Silence, Policy Of Truth) are the strongest songs (imo) but the rest are not make weights (admittedly Blue Dress and Clean dip a bit). Violator is almost 30 years old and can still hold its own in comparison to modern albums. Worthy best album of 1990

Certainly the best DP album with the standout tracks being Enjoy The Silence and Personal Jesus. Well produced as well.

Awesome album. Was never much of a Depeche Mode fan, but I loved this!

Like a lot of people my age, I bought the CD not long after hearing (and seeing the video on MTV) "Personal Jesus". Was pleasantly surprised to find out the entire CD was just as strong (if not stronger in some places). Truly a gem of its era.

Every tune on this album hits the mark.

When 'Violator' was released in 1990 DM were already a massive commercial force on the back of 1986's atmospheric 'Black Celebration' which sold over 500,000 copies in the U.S.alone, followed by 1987's 'Music for the Masses' which this time would sell a million U.S copies. 'Violators' unbridled success would push the band over the edge to become one the biggest acts in the globe for a period of time

'Violator' is a tour de force of only 9 tracks , 4 of which were massive selling singles . It represents DM at their zenith , a peak they would never reach again . From the guitar driven "Personal Jesus" to the kinky "Blue Dress" this album delivers top to bottom , and is correctly considered not only one of the best albums from the 1990's but one the great albums period

A MUST listen for all music fans

Your feedback for Violator