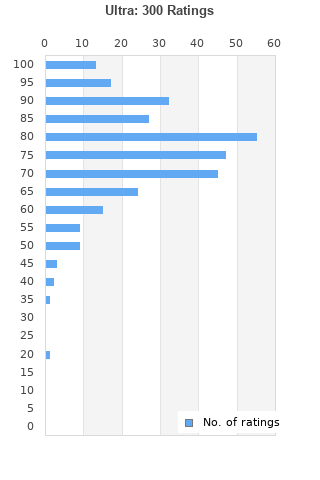 Depeche Mode ‎Ultra Rare Trax Volume 3 Remixes and Demos, Promo CD Strangelove
Condition: Very Good
Time left: 6h 30m 30s
Ships to: Worldwide
$29.99
Go to store
Product prices and availability are accurate as of the date indicated and are subject to change. Any price and availability information displayed on the linked website at the time of purchase will apply to the purchase of this product.  See full search results on eBay

Ultra is ranked 5th best out of 39 albums by Depeche Mode on BestEverAlbums.com.

The best album by Depeche Mode is Violator which is ranked number 127 in the list of all-time albums with a total rank score of 13,739. 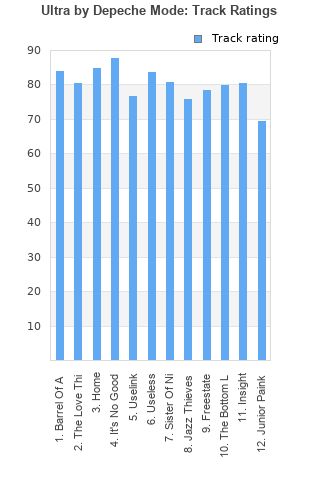 Rating metrics: Outliers can be removed when calculating a mean average to dampen the effects of ratings outside the normal distribution. This figure is provided as the trimmed mean. A high standard deviation can be legitimate, but can sometimes indicate 'gaming' is occurring. Consider a simplified example* of an item receiving ratings of 100, 50, & 0. The mean average rating would be 50. However, ratings of 55, 50 & 45 could also result in the same average. The second average might be more trusted because there is more consensus around a particular rating (a lower deviation).
(*In practice, some albums can have several thousand ratings)
This album is rated in the top 8% of all albums on BestEverAlbums.com. This album has a mean average rating of 76.0/100. The trimmed mean (excluding outliers) is 76.3/100. The standard deviation for this album is 12.9.

Compared to the inevitable "Violator", "Ultra" offers only a few good songs. It all starts very well with "Barrel of a Gunn" but after track 1 "Ultra" unfortunately gets annoying. The melodies and the production are not bad, but they are absolutely unable to get me interested. A pity, because I love the darkness and sharp edge that DM chose in his best days as the starting point for unforgettable songs such as "Personal Jesus". "Barrel of a Gun" is, in my opinion, also the track that has been worked the hardest, and that hard work makes the song particularly exciting. Some of the components that scream here for the attention of the listener are the riff of the electric guitar dueling with the utterly expressive vocals of Gahan (who, if you believe the rumors and interviews, should actually have been dead), propelled by a nice pumping rhythm, the very well placed intervention of the humming choir etc.. DM has come to lean on "Industrial" but it is nice to see that the band retains its individuality (The same can be said of Gary Numan: praised by Trent Reznor of NIN because of being so very influential, but carefully seeking its own way without any plagiarism. The track "Home" sung by Gore is a favorite song for many fans. I certainly don't count myself in but "Home" is certainly relevant and has a handsome, somewhat daring vocal line and beautiful arrangements (violins cutting their way through the outro). Uselink is the kind of filler that can fascinate. In my opinion Gore would effortlessly succeed in composing strong soundtracks. But we cannot get further with that idea. Painful conclusion: only a few tracks rise above mediocrity, and that is definitely not enough for DM. I fear that Violator will never be matched.

Ultra lacks a pulsating theme musically or instrumentally, the album exists but it rarely rewards.

Depeche Mode head towards a more ambient sound. It's a good album, but I do think that the peak years(1987-1993)were now behind them. As ever though the singles released from, ultra, are excellent, barrel of a gun, is brilliant, as is, it's no good, and, home. Depeche Mode were always a brilliant singles band, but as for the album, after the first third, the record starts to fizzle out and by the last tracks has completely run out of steam. A fairly good album then, but certainly not their best.

Great album. It's No Good is the best song here.

A really dark and powerful album, and another very good one by them. I love Depeche Mode. This was their last album that really did it for me though.

Dark electronics mixed with guitar rifts and even some orchestral strings. This was Depeche Mode's finest and most varied album which feels gothic at times.

Your feedback for Ultra