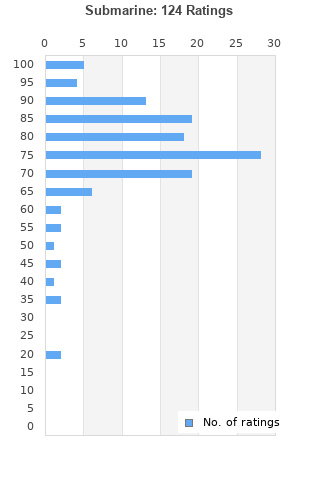 Alex Turner-Submarine (UK IMPORT) CD NEW
Condition: Brand New
Time left: 3d 13h 16m 52s
Ships to: Worldwide
$12.34
Go to store
Product prices and availability are accurate as of the date indicated and are subject to change. Any price and availability information displayed on the linked website at the time of purchase will apply to the purchase of this product.  See full search results on eBay 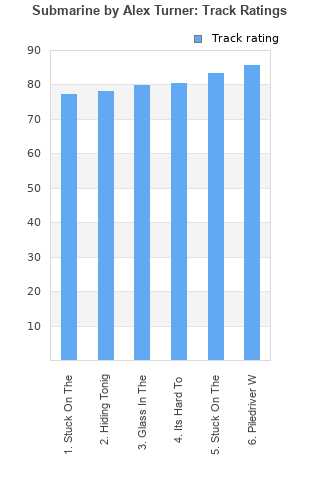 Rating metrics: Outliers can be removed when calculating a mean average to dampen the effects of ratings outside the normal distribution. This figure is provided as the trimmed mean. A high standard deviation can be legitimate, but can sometimes indicate 'gaming' is occurring. Consider a simplified example* of an item receiving ratings of 100, 50, & 0. The mean average rating would be 50. However, ratings of 55, 50 & 45 could also result in the same average. The second average might be more trusted because there is more consensus around a particular rating (a lower deviation).
(*In practice, some albums can have several thousand ratings)
This album is rated in the top 5% of all albums on BestEverAlbums.com. This album has a Bayesian average rating of 77.0/100, a mean average of 76.3/100, and a trimmed mean (excluding outliers) of 77.3/100. The standard deviation for this album is 14.5.

Not a fan of the movie, but this is great. Short and sweet, allows Alex Turner to demonstrate his songwriting skills.

Amazing soundtrack to a great film, Alex Turner sounds really nice on acoustic songs and his beautiful lyricism comes through clearer thanks to that. I honestly think he's one of the best songwriters currently.

Favourite track: Glass in the park

This has to be one of the best EPs i ever heard. Simple songs in the style of Suck It And See's songwriting. I like It, I like It very much. When I first heard It I thought "Wow, Alex Turner is really one of the best songwriters out there".

This short album is absolutley fantastic even though i haven't seen the film.I absolutely love alex turner's songwriting. Criminally underated

I've been a big fan of the Arctic Monkeys and Turner's songwriting for a while now, and the other day I heard that they scored a movie called Submarine(Which is a brilliant film by the way). After watching it, I instantly downloaded the album and went on a walk in a snowy park with my ear buds. I can truthfully say that that walk was one of the best moments with music I've ever had. The best soundtrack of all time, and one of the best albums of all time.

I saw the film recently, but I didn't recognize his voice at all. Didn't know he made music this soft and beautiful!

The voice of the Arctic Monkeys has a solo album!? Told by no one.

Your feedback for Submarine