Microphones In 2020 (studio album) by The Microphones 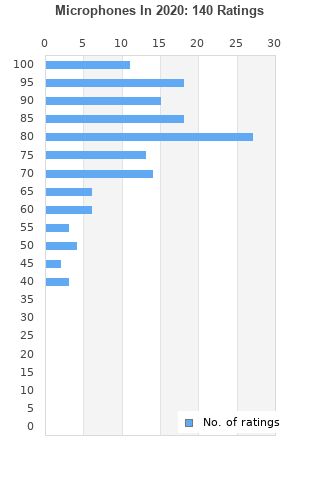 The Microphones 'The Microphones in 2020' 2xLP NEW Mount Eerie
Condition: New
Time left: 30d 22h 2m 38s
Ships to: Worldwide
$27.00
Go to store
Product prices and availability are accurate as of the date indicated and are subject to change. Any price and availability information displayed on the linked website at the time of purchase will apply to the purchase of this product.  See full search results on eBay

Microphones In 2020 is ranked 3rd best out of 15 albums by The Microphones on BestEverAlbums.com.

The best album by The Microphones is The Glow Pt. 2 which is ranked number 187 in the list of all-time albums with a total rank score of 9,802. 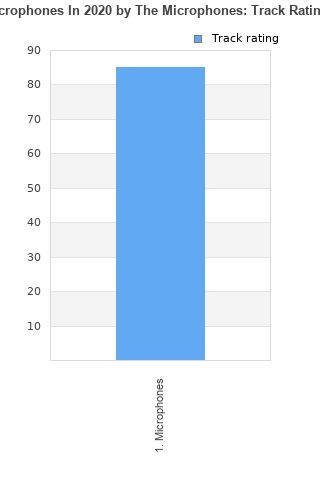 Rating metrics: Outliers can be removed when calculating a mean average to dampen the effects of ratings outside the normal distribution. This figure is provided as the trimmed mean. A high standard deviation can be legitimate, but can sometimes indicate 'gaming' is occurring. Consider a simplified example* of an item receiving ratings of 100, 50, & 0. The mean average rating would be 50. However, ratings of 55, 50 & 45 could also result in the same average. The second average might be more trusted because there is more consensus around a particular rating (a lower deviation).
(*In practice, some albums can have several thousand ratings)
This album is rated in the top 3% of all albums on BestEverAlbums.com. This album has a Bayesian average rating of 78.1/100, a mean average of 78.1/100, and a trimmed mean (excluding outliers) of 78.5/100. The standard deviation for this album is 15.0.

Good but as this is my first exposure to The Microphones et al I feel like I'm missing something. I like the sound but the lyrics are a little meaningless to me. Some interesting thoughts on life and its meaning if there is one. I'm guessing I'd enjoy the history a bit more if I was familiar with the music.

I have a strong feeling that in retrospect this will be viewed as a masterpiece.

I totally get not being into this album, but it's the kind of record that is deceptively simple. Phil Elverum makes what he does look easy, but there's not a dull moment on this thing. Not to mention that I'm already in the bag for The Microphones/Mount Eerie. I've loved The Glow Pt. 2 for years, but ever since A Crow Looked at Me, I've been totally smitten, and Microphones in 2020 is a genuinely great piece of music and songwriting. I've only listened to it once, but this could be a surprise AOTY for me.

this is super pretentious but luckily so am i

While some people will most certainly see this record as self-indulgent drivel (probably rightfully so) as a moderate fan of Phil’s work this was an incredibly satisfying listen to me. It seems like he’s using music to cope with difficult emotions of nostalgia and time and he reflects on these ideas in an artistic and poignant way. Reminds me a bit of some of Mark Kozelek’s best music, backed by beautiful nylon strings with occasional moments of heavy distortion and beautiful vocal harmonies. Phil’s self awareness and fascination with nature gives the pretty repetitive song much needed character. Not an album I’ll return to often by any means, but it doesn’t have to be tight or catchy when it clearly isn’t trying to be. The length accurately reflects the monumental themes and colossal scale within Phil’s lyricism, and it’s refreshing to hear something this open and honest.

One song that takes 8 minutes to end the 2 chord acoustic monotony before the singer starts sharing his thoughts over the same until it ends 45 minutes later. Has its moments when you think you think it may awaken from its slumber only to fall back into more noodling. Very few people will get through this, never mind want to hear it again

A meditative masterpiece that will surely stand the test of time.

Your feedback for Microphones In 2020