The Family That Plays Together (studio album) by Spirit 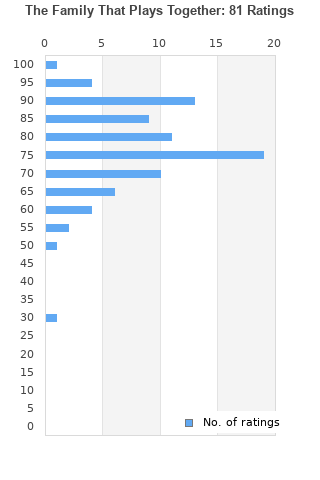 THE FAMILY THAT PLAYS TOGETHER NEW VINYL
Condition: New
Time left: 3h 14m 43s
Ships to: Worldwide
$39.89
Go to store
Product prices and availability are accurate as of the date indicated and are subject to change. Any price and availability information displayed on the linked website at the time of purchase will apply to the purchase of this product.  See full search results on eBay

The Family That Plays Together is ranked 3rd best out of 22 albums by Spirit on BestEverAlbums.com.

The best album by Spirit is Twelve Dreams Of Dr. Sardonicus which is ranked number 1843 in the list of all-time albums with a total rank score of 917.

Listen to The Family That Plays Together on YouTube 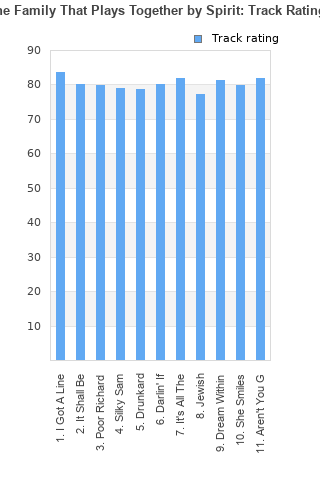 The Family That Plays Together rankings

The Family That Plays Together collection

The Family That Plays Together ratings

Rating metrics: Outliers can be removed when calculating a mean average to dampen the effects of ratings outside the normal distribution. This figure is provided as the trimmed mean. A high standard deviation can be legitimate, but can sometimes indicate 'gaming' is occurring. Consider a simplified example* of an item receiving ratings of 100, 50, & 0. The mean average rating would be 50. However, ratings of 55, 50 & 45 could also result in the same average. The second average might be more trusted because there is more consensus around a particular rating (a lower deviation).
(*In practice, some albums can have several thousand ratings)
This album is rated in the top 4% of all albums on BestEverAlbums.com. This album has a Bayesian average rating of 77.3/100, a mean average of 77.3/100, and a trimmed mean (excluding outliers) of 77.9/100. The standard deviation for this album is 11.6.

The Family That Plays Together favourites

The Family That Plays Together comments

This album must have sounded years ahead of its time when it came out in 68. After the brilliant upbeat opener, 'It Shall Be' is a much more deep and soulful track which then moves seamlessly into Fresh Garbage, upbeat and original. The strings created on the album sound like something from a Prophet Five, a synth which hadn't been invented in 68! 'Drunkard' has it all, cellos, flute, possibly a string quartet to boot! One of those albums where you hear more with each listen.

Best album of the band with "Spirit" (1968) and the psychedelic "Twelve Dreams of Dr. Sardonicus" (1970). The Spirit style is a mixture of rock, blues, jazz but especially psychedelic and early progressive rock. In brief, delightful melodies and very influent work!

Solid psychedelic rock. “I Got a Line on You” is one of the great songs of the era—of any era.

Your feedback for The Family That Plays Together