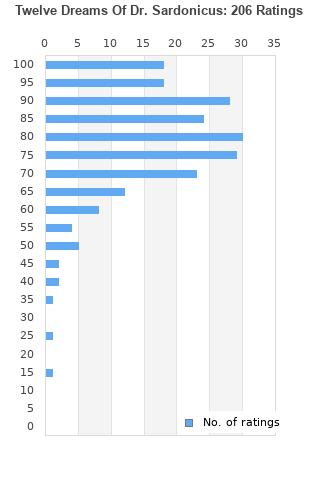 Twelve Dreams Of Dr. Sardonicus by Spirit LP GATEFOLD 1973 VG/VG Out Of Print
Condition: Used
Time left: 4h 29m 54s
Ships to: Worldwide
$7.00
Go to store
Product prices and availability are accurate as of the date indicated and are subject to change. Any price and availability information displayed on the linked website at the time of purchase will apply to the purchase of this product.  See full search results on eBay

Twelve Dreams Of Dr. Sardonicus is ranked as the best album by Spirit.

Listen to Twelve Dreams Of Dr. Sardonicus on YouTube 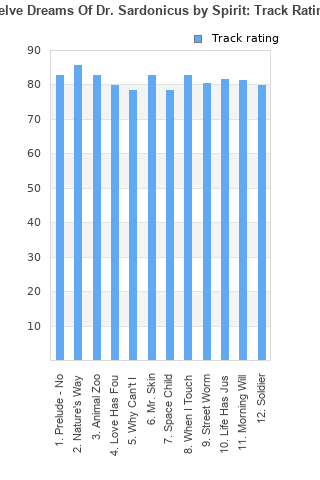 Rating metrics: Outliers can be removed when calculating a mean average to dampen the effects of ratings outside the normal distribution. This figure is provided as the trimmed mean. A high standard deviation can be legitimate, but can sometimes indicate 'gaming' is occurring. Consider a simplified example* of an item receiving ratings of 100, 50, & 0. The mean average rating would be 50. However, ratings of 55, 50 & 45 could also result in the same average. The second average might be more trusted because there is more consensus around a particular rating (a lower deviation).
(*In practice, some albums can have several thousand ratings)
This album is rated in the top 2% of all albums on BestEverAlbums.com. This album has a Bayesian average rating of 79.0/100, a mean average of 78.7/100, and a trimmed mean (excluding outliers) of 79.3/100. The standard deviation for this album is 14.8.

marginally above average rock and roll of the era

A very underrated classic. It was no holds barred in the studio in those days. These guys put together a flow rarely seen in an era of concept albums and rock operas.

A album which was years ahead of its time when released in 1970. The sleeve notes (CD version) refer to the Moog Sythesizer 'unlike today's compact modules, this one looked like an old fashioned telephone operator's station with cables going in and out every direction', this would have been an early Moog modular. A fantastic collection of tracks from the moody quite heavy 'When I Touch You' which builds up to a fantastic acid sounding guitar crescendo. 'Street Worm' showcases some amazing guitar work which is almost metal in its delivery. The upbeat 'Morning Will Come' introduces brass stabs adding to the overall interest of the album. The slower 'Soldier' plays on vocal harmonies which work beautifully. Overall a real treat of a listening experience.

One of those great Californian albums of the late sixties. The twelve dreams of Dr. Sardonicus, is Spirit's masterpiece. Fantastic songs including, nature's way, Mr. Skin, and, love has found a way. A wonderfully topical album that should never be forgotten or overlooked.

The masterpiece of one truly incredible band

This album is now rightly regarded as a West Coast psychedelic masterpiece and is incredibly well supported by the critics. By 1970 Spirit were a band that have matured into an innovative and highly skilled group. It is an album packed full of superb songs including Nature’s Way (which became a slow burning FM staple), the rock brass tinged funk of Mr Skin and the haunting Love Has Found a Way which is full of clever arrangements and skilful harmonies.

The songs are consistently strong (although side 1 is superior to side 2) and Randy California’s guitar work is superb irrespective of style and covers everything from proto metal to delicate folk rock.

My favorite Spirit album, closes off nicely the era of 60's psychedelic experimentation with a reveled lyrical sensitivity and jazz-infused music. At the same time it heralds the 70's with lyrical themes that reference extensively the environment and coincides with the first celebration of Earth Day.

....on a given day this is the best album of the seventies, and one of the best of all time. perfectly realized, mysterious, profound, progressive, tasteful, bodacious, at turns quiet and then fuzzmonster-ish. if you like rock guitar, randy california is in the pantheon up there with many much more rich and famous members. a concept album loosely revolving around "ecology" and love. the coda, soldier, seems to be the end of an era. essential.

Your feedback for Twelve Dreams Of Dr. Sardonicus