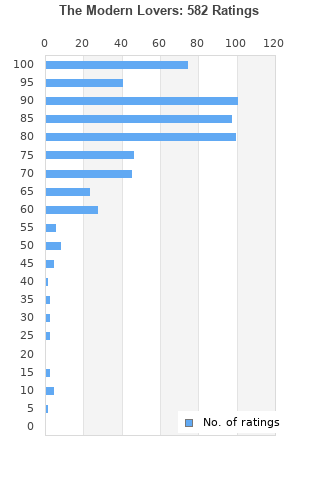 CD: The Best of JONATHAN RICHMAN & THE MODERN LOVERS The Beserkley Years NM
Condition: Like New
Time left: 7h 50m 40s
Ships to: Worldwide
$15.00
Go to store
Product prices and availability are accurate as of the date indicated and are subject to change. Any price and availability information displayed on the linked website at the time of purchase will apply to the purchase of this product.  See full search results on eBay 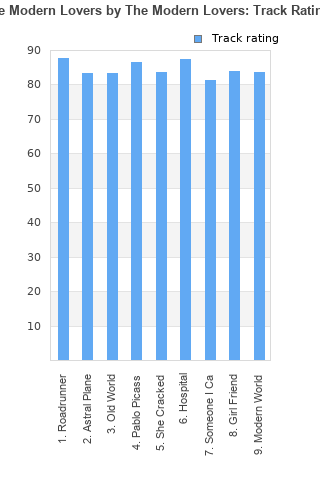 Rating metrics: Outliers can be removed when calculating a mean average to dampen the effects of ratings outside the normal distribution. This figure is provided as the trimmed mean. A high standard deviation can be legitimate, but can sometimes indicate 'gaming' is occurring. Consider a simplified example* of an item receiving ratings of 100, 50, & 0. The mean average rating would be 50. However, ratings of 55, 50 & 45 could also result in the same average. The second average might be more trusted because there is more consensus around a particular rating (a lower deviation).
(*In practice, some albums can have several thousand ratings)
This album is rated in the top 1% of all albums on BestEverAlbums.com. This album has a Bayesian average rating of 82.6/100, a mean average of 81.7/100, and a trimmed mean (excluding outliers) of 82.8/100. The standard deviation for this album is 14.9.

Not sure I get the reverence for this, but I liked it anyway.

If albums could have children, this would be the offspring of Loaded and Fun House.

What a strange record. Listed on this site as a 1976 album, which is true in terms of release date, but some of these songs were almost 6 years old. It’s kind of a greatest hits record, but of course none of them were hits. If only they could have stuck around, caught a few different breaks. Oh well, I guess it wasn’t meant to be. At least there is one perfect collection to savor and dream on.

Ahead of its time is an understatement

Here is a list of things Jonathan Richman loves:

Hippy Johnny only gets a 'like' thrown his way, poor guy. 'I'm Straight' is my favourite track, my interpretation is that it's Richman's faux promise to his girlfriend to get clean and shun his stoner alter-ego.

Musically, the songs are primitive, usually revolving around two chords and a third where adventurous. The recordings give the impression of being lazily rehearsed, which allows for some spontaneous sounding guitar and improvised instrumental sections (usually with an organ solo). The Modern Lovers are bare bones rock and roll at it's most fun, played by your friends band, except they are good. I suppose part of the appeal is that the exciting elements of the Velvet's sound are present here but Richman sidesteps their overt aim of producing art. Instead his main aim is to have fun, and for you to have fun too.

Simple songs but it's incredibly important in the context of rock and punk. Amazing record

I can relate to a lot of these lyrics...very happy this, er, perspective is on record.

If this wasn't 421 my feedback would be different
This album is brutally underrated here, Yeezus, Sigh No More, The Black Parade, xx, etc above this one what is happening?
Artist who were influenced by this album: Almost every post-punk band you know .
A rock n' roll must-hear, a masterpiece can't be so lower ranked here.

If I had to choose the one album that defined me as a person, this would be it. The only flaw is not including the brilliant "I'm Straight" and "Dignified and Old" in the original release, but perhaps it was being saved for the greatest double A-side that never was.

Your feedback for The Modern Lovers