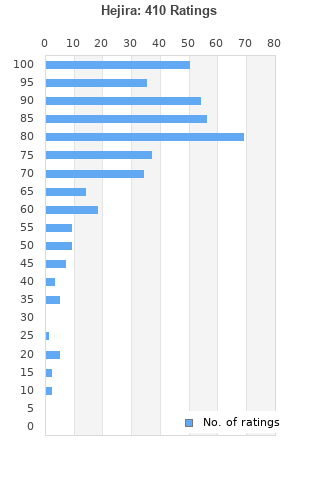 Joni Mitchell: Hejira =LP vinyl *BRAND NEW*=
Condition: New
Time left: 20h 31m 13s
Ships to: Worldwide
£20.19
Go to store
Product prices and availability are accurate as of the date indicated and are subject to change. Any price and availability information displayed on the linked website at the time of purchase will apply to the purchase of this product.  See full search results on eBay

Hejira is ranked 3rd best out of 30 albums by Joni Mitchell on BestEverAlbums.com.

The best album by Joni Mitchell is Blue which is ranked number 79 in the list of all-time albums with a total rank score of 19,529. 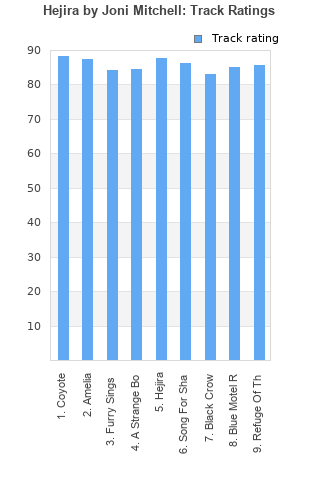 Rating metrics: Outliers can be removed when calculating a mean average to dampen the effects of ratings outside the normal distribution. This figure is provided as the trimmed mean. A high standard deviation can be legitimate, but can sometimes indicate 'gaming' is occurring. Consider a simplified example* of an item receiving ratings of 100, 50, & 0. The mean average rating would be 50. However, ratings of 55, 50 & 45 could also result in the same average. The second average might be more trusted because there is more consensus around a particular rating (a lower deviation).
(*In practice, some albums can have several thousand ratings)
This album is rated in the top 2% of all albums on BestEverAlbums.com. This album has a Bayesian average rating of 79.8/100, a mean average of 78.9/100, and a trimmed mean (excluding outliers) of 80.0/100. The standard deviation for this album is 17.1.

Love everything about thks album. Maybe just some of the lyrics don't interest me much but everything is still very poetic and original. Can't even try to duplicate the unique songwriting Joni had on this one. I don't really love other albums by her but this album grabbed me from the first listen and it is one of my all time favorite albums.

Great album overall, but coyote is an incredible song

For me this album was slow burner, sure some of the tracks are superb and some were average. But now i think with out doubt its one of her best albums.

Here, as with many of her releases, Joni is writing on a level most of her contemporaries can only dream of. Oh.. and Jaco...badass.

This album is gorgeous. The arrangements are superb and they are filled out by some incredibly tasteful instrumentation. The mix of this record is absolutely perfect, some jaw dropping lyrical passages, and Jaco!

My fave Joni album by a mile, better than the overrated Blue IMO.
I'm surprised some comments describe Hejira as inaccessible, I find it far easier than Don Juan's Reckless Daughter, say.
This is an artist at the peak of her powers.

I think this is the last truly great album Joni made. The instrumentation is great once you get acclimated to it over repeated listens, and the lyrics are some of her best. Where this album suffers is her vocal performance. This isn't an accessible record, but it's still wonderful.

Not my favorite Joni, but still better than most things.

Your feedback for Hejira