A Trick Of The Tail (studio album) by Genesis 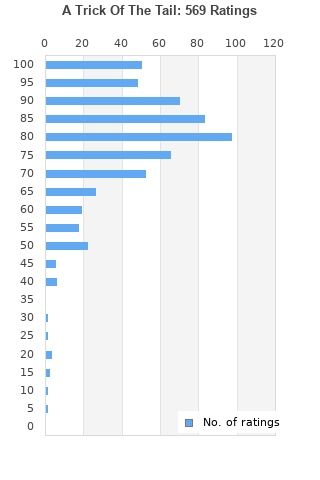 Genesis ‎– A Trick Of The Tail 180g YELLOW VINYL LP NEW & SEALED
Condition: New
Time left: 44m 13s
Ships to: Worldwide
$59.95
Go to store
Product prices and availability are accurate as of the date indicated and are subject to change. Any price and availability information displayed on the linked website at the time of purchase will apply to the purchase of this product.  See full search results on eBay

A Trick Of The Tail is ranked 4th best out of 32 albums by Genesis on BestEverAlbums.com.

The best album by Genesis is Selling England By The Pound which is ranked number 126 in the list of all-time albums with a total rank score of 13,558.

Listen to A Trick Of The Tail on YouTube 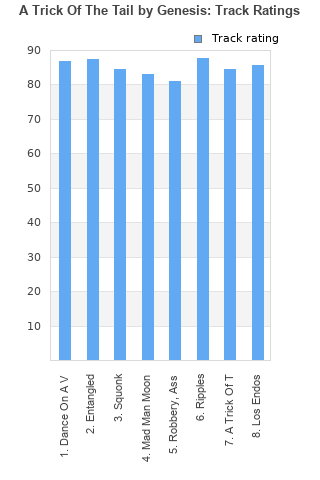 A Trick Of The Tail rankings

A Trick Of The Tail collection

A Trick Of The Tail ratings

Rating metrics: Outliers can be removed when calculating a mean average to dampen the effects of ratings outside the normal distribution. This figure is provided as the trimmed mean. A high standard deviation can be legitimate, but can sometimes indicate 'gaming' is occurring. Consider a simplified example* of an item receiving ratings of 100, 50, & 0. The mean average rating would be 50. However, ratings of 55, 50 & 45 could also result in the same average. The second average might be more trusted because there is more consensus around a particular rating (a lower deviation).
(*In practice, some albums can have several thousand ratings)
This album is rated in the top 2% of all albums on BestEverAlbums.com. This album has a Bayesian average rating of 79.4/100, a mean average of 78.7/100, and a trimmed mean (excluding outliers) of 79.5/100. The standard deviation for this album is 15.5.

A Trick Of The Tail favourites

A Trick Of The Tail comments

Wow, what a statement from a band that most people had written off after Pete's departure. It's strong, melodic, madrigal and mystical. Almost full marks. The highlights are in the playing and the vocals.

The underrated masterpiece of Genesis. Perfect balance between Gabriel's era and Collins' era.

Coming up with this without Gabriel was a great achievement, but still a bit weaker than their classic stuff.

While perhaps A Trick of the Tail is not Genesis' best album (that award goes to Selling England by the Pound), it should be regarded as their crowning achievement. The fact that they put out an album this amazing immediately after Peter Gabriel left is nothing short of astonishing. So many wonderful themes on this album: the need to succeed under pressure (Dance on a Volcano), the longing to be somewhere else (Mad Man Moon), dealing with one's inhibitions and fears (Squonk), being grateful for what you have (A Trick of the Tail), the impermanence of beauty (Ripples), it's all incredible. And this is backed up with some of the finest musicianship ever from the quartet of Collins, Banks, Rutherford and Hackett. This is one of Genesis' most towering achievements and a slice of prog perfection that any fan of the genre should indulge in.

Possibly the most consistent late-stage prog album along with Moving Pictures, Collins showed that he could fill the gaping hole left by Gabriel's departure and still come out with a fantastic prog record.

My favorite post Gabriel release. Dance on a volcano, Squonk & Los Endos are top tracks however the entire album is really good.

There is still plenty of talent here and awesome performances despite Gabriel being gone. I just feel the songs were lacking a bit with some exceptions, and Phil Collins doesn't have as much charisma or power as Gabriel, and I actually enjoy his singing on the later pop albums personally. Something about this crystal clean and direct voice doesn't gel well with the crazy prog stuff going on, I think Peter was able to add to the music's intensity and wackiness very well, and changing up his style in songs, whereas Phil just sounds like he is towing the line and giving the same kind of delivery in every song. Nonetheless it's still an impressive album and showed that the band could continue and it's still worth checking out. The first two and the last three tracks are the best, with the middle section just feeling a bit too homogeneous and dragged out. This is the 2nd best Phil Collins era album behind Duke IMO. Nothing they did will ever match the Peter Gabriel era though, again, IMO.

A great transitional album between the pop and prog era Genesis and a highly underrated one at that.

I feel like this was a sort of return to their archaic storytelling mode after the craziness of the Lamb and Peter's departure. Entangled and Ripples are both infinitely lovely, and Los Endos is very unique, quite unlike any other Genesis song.

Your feedback for A Trick Of The Tail