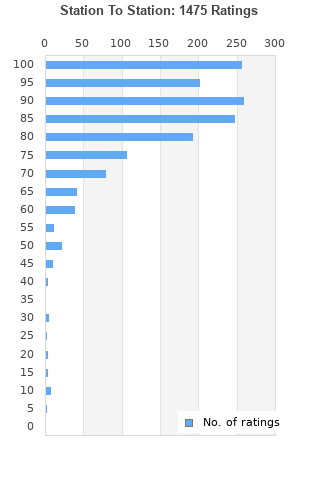 DAVID BOWIE STATION TO STATION / WITH OBI
Condition: Used
Time left: 3h 33m 29s
Ships to: Worldwide
$69.99
Go to store
Product prices and availability are accurate as of the date indicated and are subject to change. Any price and availability information displayed on the linked website at the time of purchase will apply to the purchase of this product.  See full search results on eBay

Station To Station is ranked 4th best out of 82 albums by David Bowie on BestEverAlbums.com.

The best album by David Bowie is The Rise And Fall Of Ziggy Stardust And The Spiders From Mars which is ranked number 9 in the list of all-time albums with a total rank score of 62,184. 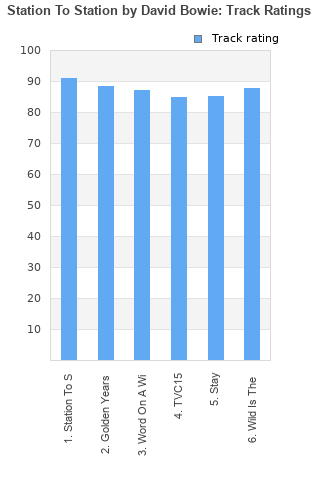 Rating metrics: Outliers can be removed when calculating a mean average to dampen the effects of ratings outside the normal distribution. This figure is provided as the trimmed mean. A high standard deviation can be legitimate, but can sometimes indicate 'gaming' is occurring. Consider a simplified example* of an item receiving ratings of 100, 50, & 0. The mean average rating would be 50. However, ratings of 55, 50 & 45 could also result in the same average. The second average might be more trusted because there is more consensus around a particular rating (a lower deviation).
(*In practice, some albums can have several thousand ratings)
This album is rated in the top 1% of all albums on BestEverAlbums.com. This album has a Bayesian average rating of 85.4/100, a mean average of 84.8/100, and a trimmed mean (excluding outliers) of 85.5/100. The standard deviation for this album is 13.5.

It is a good album, all of the songs are solid. Stay along with TVC15, and Station To Station are my favourite songs.The more you listen to it ,the more you like it.

For me, a real grower of an album. Once it clicks it's great, but it might take a few tries. I went from "It's okay but maybe not for me" to "This is one of Bowie's best". It's a top three Bowie album for me at the very least. Stay is the only real low point. TVC15 also has its lows but it does also have highs with the "Transition" part. Everything else is really good.

Best Bowie album imo. It's like soul music made in space, with a prom party took place in a space station. No weak track in this album AT ALL. White chocolate at its best.

Never really got into it, still can't deny the incredible talent shown on this record.

Never really got into this one too much. With the exception of the first two tracks, these songs weren't all that interesting and run too long.

Wild is the Wind and Golden years stand out on this album.

It's one of those albums where one track towers over the rest. When it's the opening track, it's even more striking.

Great album, Incredible title track overshadows the rest, which is also good, but the opener makes the album.

One of his best album

Your feedback for Station To Station