A Day At The Races (studio album) by Queen 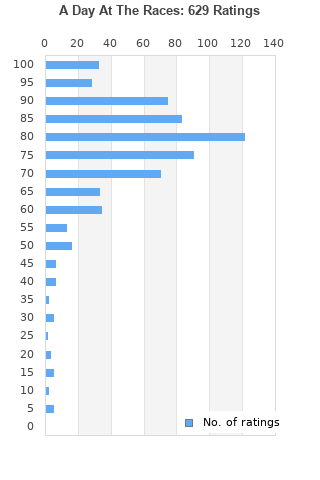 A Day At The Races is ranked 5th best out of 49 albums by Queen on BestEverAlbums.com.

The best album by Queen is A Night At The Opera which is ranked number 95 in the list of all-time albums with a total rank score of 15,304.

Funk Flex at The Queen
The Queen, Wilmington, United States.

Listen to A Day At The Races on YouTube 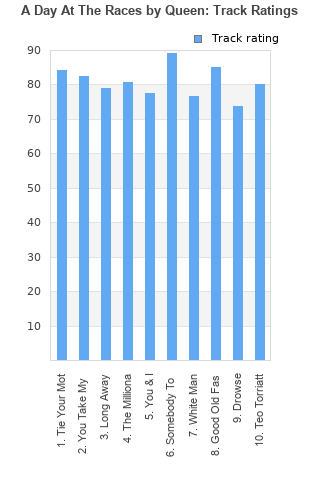 A Day At The Races rankings

A Day At The Races collection

A Day At The Races ratings

Rating metrics: Outliers can be removed when calculating a mean average to dampen the effects of ratings outside the normal distribution. This figure is provided as the trimmed mean. A high standard deviation can be legitimate, but can sometimes indicate 'gaming' is occurring. Consider a simplified example* of an item receiving ratings of 100, 50, & 0. The mean average rating would be 50. However, ratings of 55, 50 & 45 could also result in the same average. The second average might be more trusted because there is more consensus around a particular rating (a lower deviation).
(*In practice, some albums can have several thousand ratings)
This album is rated in the top 5% of all albums on BestEverAlbums.com. This album has a Bayesian average rating of 77.1/100, a mean average of 75.6/100, and a trimmed mean (excluding outliers) of 77.2/100. The standard deviation for this album is 16.7.

A Day At The Races favourites

A Day At The Races comments

Yet again, some great songs but too much of the album is filler. Highlights are Teo Torriate and Somebody To Love. There's not too much else to shout about unfortunately.

I do love Queen and enjoy the odd mix of songs that they throw into their albums but those wee dafties also stop the individuals albums from excelling. Think what a single album you could have gotten from this and A Night At The Opera combined without the dafties? Somebody To Love the standout here for me.

My favorite Queen album because to me it's the most consistent (A Night At The Opera has in my opinion more filler) and of course also because it has my favorite Queen track: Somebody To Love. It's theatrical as hell but I adore this song. And next to this there's of course also Tie Your Mother Down. Some of the tracks are coming close to vaudeville theatre (The Millionaire Waltz, Good Old Fashion Lover Boy) but they also stay on the right side of the schmalz, something that would become their downside on their later records.

I found this to be Queen's weakest album up to that point. Still a consistently good album though.

A Night At The Opera was a difficult act to follow, and Queen returned with the more direct and less ambitious A Day At The Races.

Often compared to A Night At The Opera, but stands up just fine on its own. An excellent album.

Overall I find it way more consistent than ANATO. Ok Bohemian and Best Friend could be way better than the best songs here but IMO the lesser tracks here are still good and enjoyable while there were not.
A less pretensious work but I think this one is the most listeneable from start to finish Queen album in the catalog.

The follow up to, a night at the opera, and also it's companion album. It's similar in content to it's predecessor, in which it contains rockers, ballads, vaudeville and sweet pop. It opens with one of the band's finest rock anthems, tie your mother down. Brian May also contributes another rocker in, white man, which features some fantastic guitar. Freddie Mercury also contributes three of his best with, the glorious gospel rock of, somebody to love, the high camp of, good old fashioned lover boy, and his beautiful ballad, you take my breath away, which I think is even better than love of my life from the last album. Elsewhere Roger Taylor's, drowse, is an underrated gem. The closing, teo torriate, is a lovely singalong . I still feel that, the millionaire waltz, is a lesser version of bo rhap, and same goes for John Deacon's, you and I, in comparison with, you're my best friend. All in all, not quite as good as a night at the opera, but still a very good album.

Not as good as "ANATO", but worthy successor. It's still consistent as their early albums. Honourable songs:
the epic "Somebody to love", rock anthem "Tie your mother down", rock opera "Milionaire waltz (the Bonhemian Rapsody of "A day at the races") and their catchiest "Good Old Fashioned Lover Boy".

Your feedback for A Day At The Races