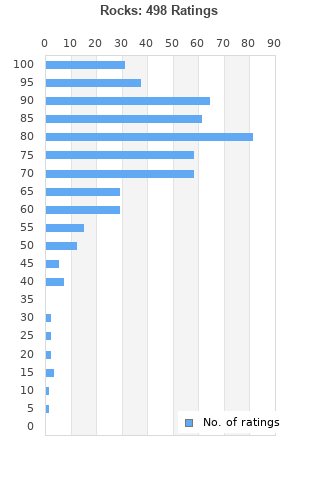 Aerosmith Live Bootleg CBS/Sony 40AP 1170~1 with OBI Poster Japan LP Vinyl
Condition: Used
Time left: 41m 11s
Ships to: Worldwide
$31.99
Go to store
Product prices and availability are accurate as of the date indicated and are subject to change. Any price and availability information displayed on the linked website at the time of purchase will apply to the purchase of this product.  See full search results on eBay

Rocks is ranked 2nd best out of 31 albums by Aerosmith on BestEverAlbums.com.

The best album by Aerosmith is Toys In The Attic which is ranked number 715 in the list of all-time albums with a total rank score of 2,660. 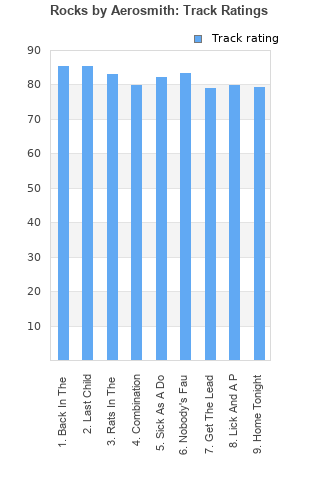 Rating metrics: Outliers can be removed when calculating a mean average to dampen the effects of ratings outside the normal distribution. This figure is provided as the trimmed mean. A high standard deviation can be legitimate, but can sometimes indicate 'gaming' is occurring. Consider a simplified example* of an item receiving ratings of 100, 50, & 0. The mean average rating would be 50. However, ratings of 55, 50 & 45 could also result in the same average. The second average might be more trusted because there is more consensus around a particular rating (a lower deviation).
(*In practice, some albums can have several thousand ratings)
This album is rated in the top 3% of all albums on BestEverAlbums.com. This album has a Bayesian average rating of 78.1/100, a mean average of 77.1/100, and a trimmed mean (excluding outliers) of 78.2/100. The standard deviation for this album is 16.0.

Opening tracks bring the heat, but they get progressively less compelling from there.

This is Aerosmith at their peek.

One of my all-time favourite albums. Every song is killer. Brad Whitford and Joe Perry kill it with their guitar work on this album. Aerosmith do a good job of imitating Led Zeppelin, but also bringing their signature raunchy and tongue-in-cheek swagger to songs.

Damn near perfect Aerosmith record. If "Home Tonight" were the equal of the previous records "You See Me Cryin." But that is nitpicking on a record with songs as good as "Rats In The Cellar" and "Sick as A Dog."

1976 was a magical year for classic rock with some history making albums coming out that year. This is one of the best from '76 and is my favorite Aerosmith album of all time. It left quite an impression on my 13 year old brain and every song is a rock gem.

The excellent follow up to, toys in the attic, rocks, is another classic rock'n'roll record. Featuring some of Aerosmith's best songs in, rats in the cellar, combination, and, last child. An enjoyable album.

Your feedback for Rocks