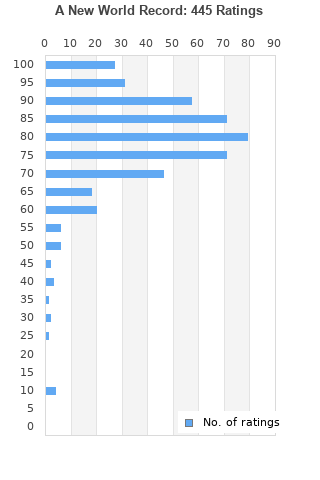 A New World Record is ranked 2nd best out of 40 albums by Electric Light Orchestra on BestEverAlbums.com.

The best album by Electric Light Orchestra is Out Of The Blue which is ranked number 487 in the list of all-time albums with a total rank score of 3,821. 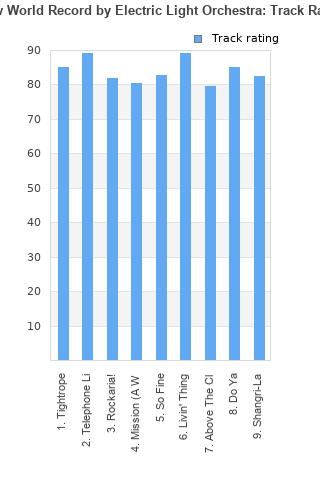 Rating metrics: Outliers can be removed when calculating a mean average to dampen the effects of ratings outside the normal distribution. This figure is provided as the trimmed mean. A high standard deviation can be legitimate, but can sometimes indicate 'gaming' is occurring. Consider a simplified example* of an item receiving ratings of 100, 50, & 0. The mean average rating would be 50. However, ratings of 55, 50 & 45 could also result in the same average. The second average might be more trusted because there is more consensus around a particular rating (a lower deviation).
(*In practice, some albums can have several thousand ratings)
This album is rated in the top 2% of all albums on BestEverAlbums.com. This album has a Bayesian average rating of 79.8/100, a mean average of 79.1/100, and a trimmed mean (excluding outliers) of 79.9/100. The standard deviation for this album is 13.9.

I didn't expect, but I really like that record. This band sounds like fusion of Queen and The Beatles and I find it beautiful. Tracks have this space theme and opera atmosphere. Highlights for me are Tightrope, Rockaria and Shangri-La.

I like NWR more than Out of the Blue. 3 hits (Telephone Line, Living Thing, Thigtrooe)
many other good songs like Rockaria and So Fine..

Electric Light Orchestra's frontman Jeff Lynne is a musician's musican, in the sense that he always seems to appear in celebrity all-star lineups of musicians, including his involvement in supergroup the Traveling Wilburys in the 1980s. This has probably had a mixed effect on people's impressions of ELO: simultaneously attracting new listeners to his back catalog and causing his work to be overshadowed in comparison to collaborators such as Bob Dylan, George Harrison, Roy Orbison, and Tom Petty. A New World Record is clear evidence that ELO deserves consideration in the same conversation with those other giants. It's an incredibly expansive, ambitious piece of work, with soaring orchestral arrangements blending with driving guitar-driven rock. "Telephone Line" is rightly the song most people know here, but sibling singles "Do Ya" and "Living Thing" are fantastic, too.

Telephone line !!! its longing and melancholic yearning, along with living thing are simply irresistible and fabulous. Their best record for me. Add in tightrope and so fine and your onto a perfect pop record, only let down by the mission in my view.

The last (and the best!) E.L.O. album to really feel like a rock record. I don't dislike synth Jeff Lynne at all, but there's a big difference between the guitar led, short and tight tracklist of this album and the poppier albums that would follow. Ironically enough, one of the big hits here is Telephone Line, a song that uses all kind of synthetic musical gimmicks to do something entirely new, and it completely works.

ELO is so underrated man

Containing as it does a curiously redundant version of the Move gem "Do Ya" (which Jeff Lynne wrote four years ago) along with a package of songs that rather reechoes ELO's material from the last couple of years, the cynic might regard A New World Record as the work of a creative person (Lynne) in the process of stealing from himself. A more generous observer (myself for instance) might view this gentle treading of the creative waters as merely temporary—the workings of a band, now peaking in popularity, that is attempting to supply audiences with exactly the sound they want to hear. Whatever your personal disposition, if you liked Face the Music and Eldorado, you'll like this one just as much. Lynne has always been rather deft with the melodic hook, and both "Livin' Thing" and "So Fine" are irresistible additions to his list of catchiest tunes. Numbers like "Mission (A World Record)" and "Shangri-la" continue the history of classy orchestral stylings that really rock, and Lynne's dominant vocals are as effectively foggy as ever. As expected, the production is lavish and the musicianship more than adequate to fulfill Lynne's Procol Harum-ish visions. By Christmas, A New World Record should be a staple in a million homes. (RS 228)

"Eat your diploma, Eric Carmen--after years of floundering, they've gone all the way and made a Moody Blues album with brains, hooks, and laffs galore. My fave is "Rockaria!," about a lass who "loves the way Puccini lays down a tune." Granted, I initially thought it was strictly for those who got off on music appreciation in high school, like the lass. But now I think it's also for those who hated it, like me. B+" - Robert's Christgau's Consumer Guide

One of the first albums I ever bought. I loved the fusion of both rock and classical music. The track Telephone Line is a classic.

Your feedback for A New World Record