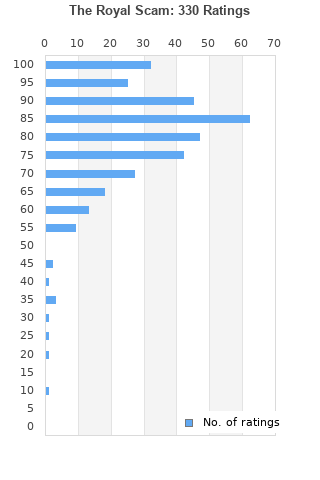 STEELY DAN The Royal Scam ABC LP M/NM Vinyl -Import Portugal Hard to Find
Condition: Used
Time left: 21h 10s
Ships to: Worldwide
$9.95
Go to store
Product prices and availability are accurate as of the date indicated and are subject to change. Any price and availability information displayed on the linked website at the time of purchase will apply to the purchase of this product.  See full search results on eBay

The Royal Scam is ranked 6th best out of 19 albums by Steely Dan on BestEverAlbums.com.

The best album by Steely Dan is Aja which is ranked number 201 in the list of all-time albums with a total rank score of 9,244. 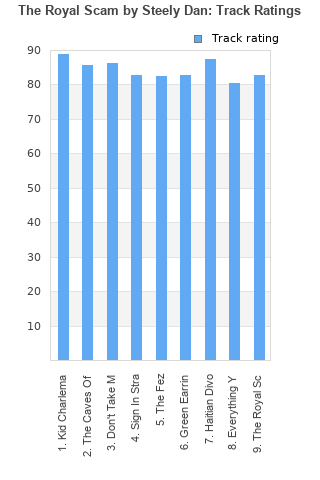 Rating metrics: Outliers can be removed when calculating a mean average to dampen the effects of ratings outside the normal distribution. This figure is provided as the trimmed mean. A high standard deviation can be legitimate, but can sometimes indicate 'gaming' is occurring. Consider a simplified example* of an item receiving ratings of 100, 50, & 0. The mean average rating would be 50. However, ratings of 55, 50 & 45 could also result in the same average. The second average might be more trusted because there is more consensus around a particular rating (a lower deviation).
(*In practice, some albums can have several thousand ratings)
This album is rated in the top 1% of all albums on BestEverAlbums.com. This album has a Bayesian average rating of 81.3/100, a mean average of 80.4/100, and a trimmed mean (excluding outliers) of 81.6/100. The standard deviation for this album is 14.3.

Probably their least spotty record, not a bad song on here.

This is my all time fav Steely Dan album. I have the original release of this one from the 70s where the album sleeve has no barcode on the back. Plays perfect. Haitian Divorce is at the top, then Caves of Altimira.

this is my favorite SD album. Has a quirkier, rockies vibe that I like better than the jazzy albums. Can't Buy a Thrill is 2nd favorite folloeed by Aja and Katy Lied. Pretzel Logic is in 5th place.

I want to say that it's better than Aja but it was such a long time since I listened to that record so I would have to give it another shot before making a determination. But. I do maintain that I believe it would have more of an emotional impact if it was less over-produced, though I do understand what people are saying about Steely Dan "doing it right". The album sounds a lot like a mix of Billy Joel and Stevie Wonder, but much more jammy than both. Kid Charlemagne is a real hit. The songs with a little more grove in them, like the fOnk on this one, serves the record well and cancels out a bit of that over-produced "esteem" that they have going on. The two following songs are also brilliant, Caves of Altamira and Don't Take Me Alive. And the album remains incredibly consistent all the way through. The mouth-guitar on Haitian Divorce is really cool. Lots of different sounds on this. Brilliant musicianship all the way through. Opened my eyes to these guys I have to say.

Less consistent than the best Dan, but still a solid album with enough great cuts to keep it in my rotation.

As of now, this is my personal favorite Steely Dan album. But after the unfortunate death of Walter Becker, I'm going to listen to the rest of their discog. Getting halfway in Countdown to Ecstasy and that record is killer also.

Another classic record from Steely Dan. The royal scam, as you would expect is full of excellent and quirky songs. The funky, kid Charlemagne, kicks the LP off, and there's no lack of strong cuts. Sign in stranger, Haitian divorce, and the title track are all great. One of the truly great seventies bands.

"The Fez" is a lot off fun too when you get into the groove!

The production is a little strange and dated on this one, but after a few listens the genius still comes through. The reggae influences are fresh and inviting. It's definitely one of Steely Dan's darker albums.

Your feedback for The Royal Scam