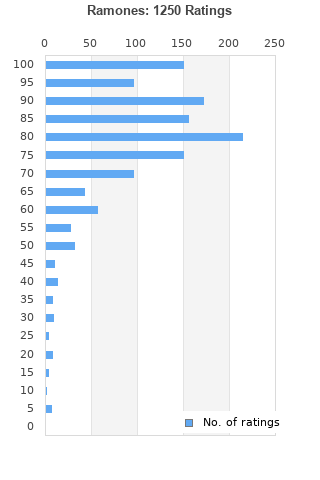 Ramones-Leave Home Remastered Edition (UK IMPORT) CD NEW
Condition: Brand New
Time left: 35m 48s
Ships to: Worldwide
$9.84
Go to store
Product prices and availability are accurate as of the date indicated and are subject to change. Any price and availability information displayed on the linked website at the time of purchase will apply to the purchase of this product.  See full search results on eBay

Ramones is ranked as the best album by Ramones. 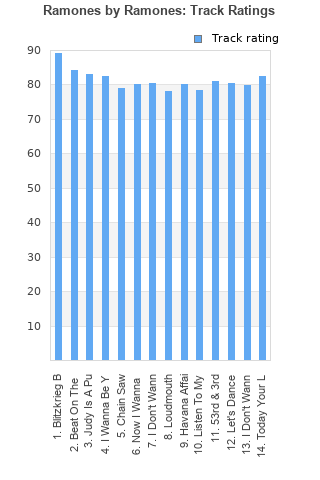 Rating metrics: Outliers can be removed when calculating a mean average to dampen the effects of ratings outside the normal distribution. This figure is provided as the trimmed mean. A high standard deviation can be legitimate, but can sometimes indicate 'gaming' is occurring. Consider a simplified example* of an item receiving ratings of 100, 50, & 0. The mean average rating would be 50. However, ratings of 55, 50 & 45 could also result in the same average. The second average might be more trusted because there is more consensus around a particular rating (a lower deviation).
(*In practice, some albums can have several thousand ratings)
This album is rated in the top 2% of all albums on BestEverAlbums.com. This album has a Bayesian average rating of 80.2/100, a mean average of 79.3/100, and a trimmed mean (excluding outliers) of 80.3/100. The standard deviation for this album is 16.6.

Absolutely essential punk album. It feels way too long, even though it is only 29 minutes long, mainly due to the striking similarity among the songs.

You have to get it to like it. Classic punk rock record.

Fav. Tracks: Blitzkrieg Bop, Beat On The Brat, Judy Is A Punk, I Wanna Be Your Boyfriend, Chain Saw, I Don't Wanna Go Down To The Basement, 53 & 3rd, Today Your Love Tomorrow The World.

Should be higher ranked on this site. The influence this album had is incredible.

I don't not enjoy this album. I don't not understand it's importance. As far as this brand of punk, 1976 was preeeetty early.

Perhaps over time this album will click a little more with me, but as of now I respect it more than I like it in all honesty. I do really love that closing track, however.

A game changing debut this was also the Ramones best album. This is where I’m comfortable drawing the line and saying this was the first official punk album. Hey Ho Let’s Go!

I can only agree with caseygow that they are a one-trick pony.
There is a severe lack of variation on this album.
Almost all tracks sound identical musically.
This album is very enjoyable though if you neglect that.

The album that ultimately launched a million high school garage bands. Real rock and roll rising from the ashes and being reborn in a flash of lightning. God bless this band!

Your feedback for Ramones